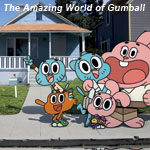 If you’re been searching for a dynamite new show that is whimsical, funny and cleverly animated, you have to look no further than Cartoon Network’s The Amazing World of Gumball, which debuted in early May. Billed as the first U.K.-produced series out of CN’s development studio in Europe, the show mixes 2D, cut-out and CG animation against live-action backgrounds to depict the adventures of its 12-year-old hero, Gumball, and his family in the town of Elmore. Not surprisingly, the cabler has already ordered a second season of 20 episodes.

Keep in mind that nothing in Elmore’s world looks quite normal: A T-Rex, a cheerleading peanut and a banana are some of his school friends. His dad is a 6’4”-tall pink rabbit, his sister is a four-year-old genius bunny named Anais and his pet goldfish Darwin became part of the family after he sprouted legs! 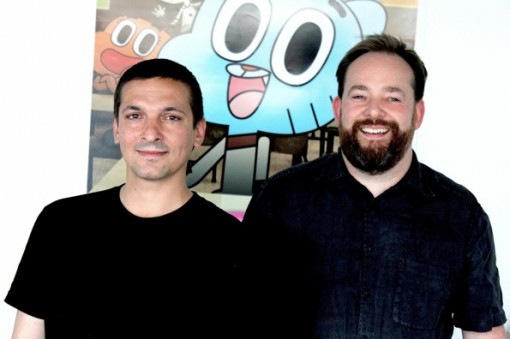 The creator of the show is 31-year-old wunderkind Ben Bocquelet, a French-born animator who joined the Cartoon Network Europe development team after a productive stint at London’s acclaimed animation house Studio AKA. “We were asked to pitch some ideas for shows, and I had kept a collection of characters that I had liked in my portfolio from the time I was working on ads,” says Bocquelet during a phone interview from the CN studio in London. “I also knew that I wanted to drop them against a live-action backdrop, so that served as the inspiration for Gumball.”

The Gumball team in London handles the storyboarding and pre-production work under the supervision of director Mic Graves, then sends the material to Dublin-based Boulder Media and Studio Soi (Berlin, Ludwisgburg) for the animation. The artists use Maya for the CG, lots of Photoshop for the backgrounds and Flash and After Effects for the 2D portions of the production. “We start working with an outline,” explains Bocquelet. “Then we punch up the storyboards, turn to animatics, put the CG and 2D together, and then animate it. 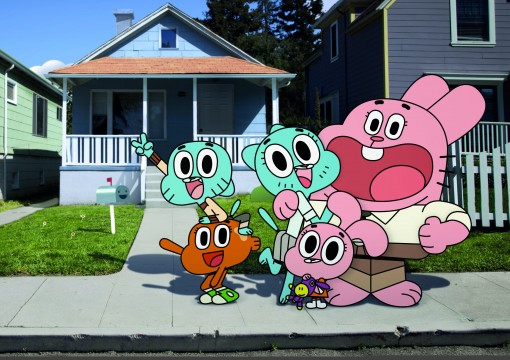 Born and raised in a small French town near Marseilles, Bocquelet says many of the show’s storylines are inspired by incidents that actually happened to him and his family members and the show’s staff. “We take common things that have happened in our lives and blow them out of proportion in three acts,” says the keen-eyed animator.

Bocquelet says he’s visually inspired by the modern illustration culture in Europe, but he’s equally influenced by The Simpsons and Japanese classics such as Akira and Hayao Miyazaki’s movies. “I always wanted to mix the animated sitcom form with the kind of family cinematic entertainment that Steven Spielberg used to do when I was growing up.”

Mic Graves, who used to work with Bocquelet at Studio AKA and is now directing Gumball, says there are several key elements that make the show stand out. “On the surface, it’s the range of animation technique we use in every episode, but really, it’s the strength of the writing and the intense storyboarding process that make it work,” says the veteran animation director. “What we’re going for is the scope and friendliness of movies like Back to the Future: Funny, but most of the stuff that inspired us in the writing are these big American movies.” 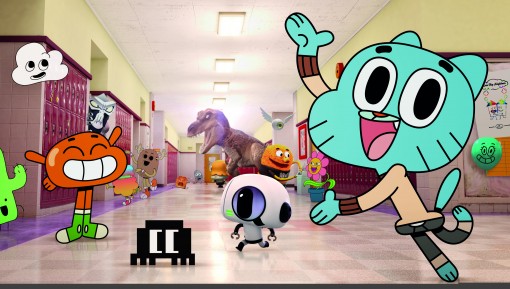 The visual diversity of the series owes a lot to the fact that both Graves and Bocquelet are former employees of Studio AKA, the Bafta-winning animation shop that is famous for its innovative commercials. “The visuals go back to the pitch work we used to do in commercials,” recalls Graves. “You pitch one style of design one week and something completely different the following week, and you put them together in one location. For the Gumball universe, the immediate family was designed as a cohesive unit, they all have one type of design. Then, the rest of the characters can be plasticine, CG, stop-frame, cut-outs; and the town is live-action.”

Graves, who grew up on Hanna-Barbera shows like Hong Kong Phooey and worked on the British preschool show Peppa Pig and the Oscar-nominated The Canterbury Tales, says he’s quite proud of the fact that kids seem to really enjoy diving in to the world of Gumball. “We’ve had some really good reactions to the show, and that’s really gratifying because we’ve been working in this dark box for two years.”

Bocquelet also agrees. “I am really glad that we found a way to deliver the show on time, and really produce something that we were happy with in terms of both visual standards and stories. I am quite happy when people laugh at these characters, because we spent a lot of time fine-tuning them…and they are actually based on my family members. It was certainly a relief when my family liked what they saw!” 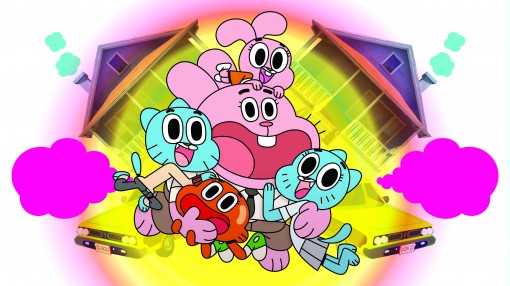 The Amazing World of Gumball airs Mondays at 8 p.m. on Cartoon Network in the U.S. The show will roll out internationally in the fall.

“I am very happy when people laugh at these characters, because we spent a lot of time fine-tuning them… and they are actually based on my own family members. It was certainly a relief when my family liked what they saw!”