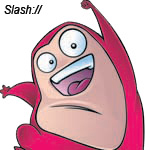 Aimed at kids ages 7 to 12, Slash:// tells of the adventures of a group of five youngsters from across the globe who, thanks to the magic power of a green stone, are able to physically travel through the worldwide web. They go up against the evil Cobra who, in possession of a fragment of the stone, is intent on stealing and destroying some of the most important works of art on the planet.

The story has an international feel, with the five main characters coming from around the world and episodes set in Florence, Paris, Barcelona, Lisbon, London and Los Angeles.