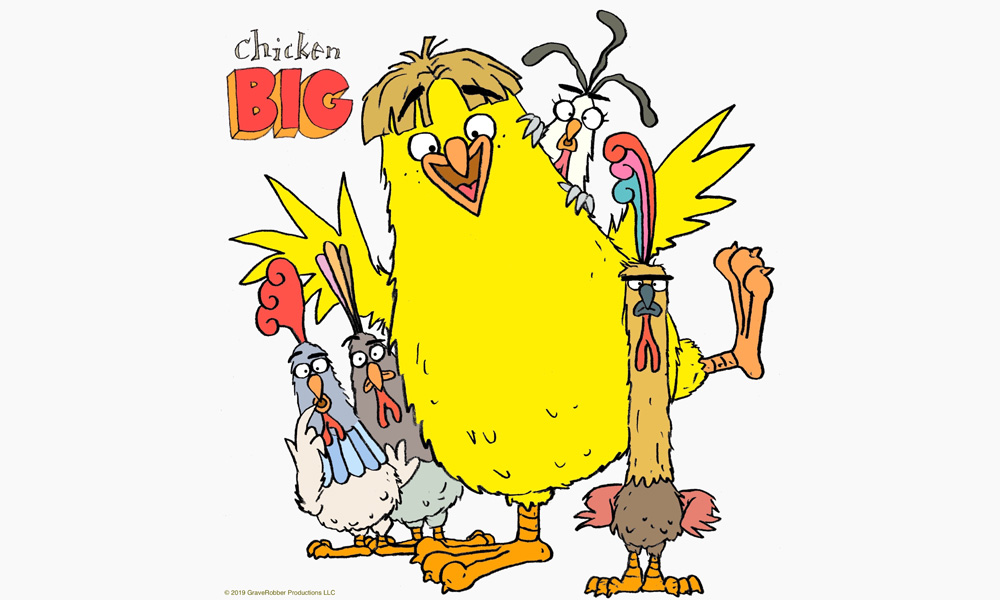 Things are really clucking along for GraveRobber — the animation studio founded two years ago by children’s book author/illustrator Keith Graves and writer/producer Rob Moreland — as the shop has teamed up with executive production and distribution company Bejuba! Entertainment on new original kids’ series Chicken Big. The 52 x 11’ series for ages 6+ made a splash at Cartoon Forum as one of the event’s few European-American projects.

“Chicken Big, the book, has been translated into a laundry list of languages from Swedish to Hebrew to Korean, to name a few, and we think the show will be fun for audiences around the world.” said Graves. “The target demo is kids 6 to 10, but like SpongeBob, we are making Chicken Big for anyone who likes to laugh — preschoolers, parents, grandparents and even drunk college students who like funny cartoons.”

Bejuba! CEO Tatiana Kober commented, “When I saw the presentation at Cartoon Forum, I turned to the executive next to me and said, ‘I’m going to get that show.’ Chicken Big is exactly the kind of funny, silly, but cleverly-written show the market is looking for.”

Based on Graves’ internationally successful picture book, Chicken Big shows what happens when a gargantuan fowl gets introduced to a comically clueless flock. The show features top voice and musical talent including Tom Kenny (SpongeBob SquarePants) and Tara Strong (My Little Pony: Friendship Is Magic, The Powerpuff Girls, The New Adventures of Rocky and Bullwinkle). Additional cast members will be announced soon.

“GraveRobber probably saved my sanity. It has been the perfect vehicle for doing what Rob and I enjoy the most: creating funny cartoons,” said Graves, who has also created the books Frank Was a Monster Who Wanted to Dance and The Monsterator. “After co-developing lots of earlier projects with major studios, Rob and I saw an opportunity to do things a little differently. It occurred to us that between the two of us we could do just about every job needed to make a show. From boards to scripts to music to editing, and with cost-saving technological advances on our side, we had all we needed to create a nearly finished show…without ever leaving our offices. It was an exhilarating idea. The inmates could start their own asylum!”

GraveRobber hired a group of young animators in Los Angeles to create test pilos and animation, holding meetings at Canter’s Delicatessen, and then brought on voice talent they knew..

“Picture the legendary John DiMaggio, the voice of Jake from Adventure Time, coming to my house,” Moreland related. “John tries to say hi to our goofy labradoodle, Pancho, who gets freaked out by his incredibly bass voice. Then Pancho hides while we record lines in my garage surrounded by camping gear and Christmas ornaments.”

GraveRobber’s upcoming projects include a CGI feature based on Graves’ spooky-funny The Monsterator; The Anne Ziety Show, a comedy which explores anxiety and depression; and a serialized cliffhanger based on Graves’ middle grade novel The Orphan of Awkward Falls. The studio is also trial airing episodes of its adult-oriented toon The Beef Sumo Show on Toon Goggles’ new SQAD platform — the series features the voices of DiMaggio and Dee Bradley Baker (American Dad) and has been #1 or #2 on the teen-targeted platform since it premiered in October.