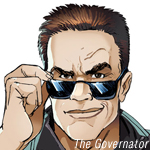 The Emmy-nominated Banks will be head writer for the new action-comedy series, a joint venture between Schwarzenegger, Stan Lee’s POW! Entertainment, Archie Comics and A Squared Entertainment. Banks worked as head writer on SpongeBob for six years, and previously worked on Nick’s The Adventures of Jimmy Neutron: Boy Genius.

“It’s an honor to be working with an esteemed group of entertainment professionals such as Governor Schwarzenegger, Stan Lee, and Andy and Amy Heyward,” said Banks. “They have created a ground-breaking series that is going to change the superhero format and I’m excited be a part of the magic that brings it all to life.”

The Governator stars an animated Schwarzenegger after he has left his post as governor of California. Schwarzenegger decides to take on the global villainy and 21st century disasters that no one else is equipped to handle. With an elite team of teens to help him, he creates a secret identity beneath his home — so secret that even his wife and kids are unaware. Using cutting-edge gear, custom-made “super suits,” state-of-the-art quirky gizmos, gadgets and vehicles, he will combat evil in all of its forms as The Governator … a superhero living a double life, who’s also a devoted family man who needs to make it home for dinner every night.

In case you missed it, here’s the official trailer:

“Throughout my career whether it has been in body building, movies or politics, my philosophy has always been to bring together the best specialized talent to create projects that people will love,” said Schwarzenegger. “Having Steven on board to head up the writing for The Governator series is a fantastic next step. His expertise, along with Stan Lee and POW! Entertainment, A2 and Archie Comics is the perfect combination.”

“Having Steven Banks join The Governator’s already remarkable roster of industry experts is extremely exciting,” said A Squared Entertainment co-founders and CEOs, Andy and Amy Heyward. “Steven’s signature quirky humor will provide the perfect balance to the action, creating a unique series that will keep kids on the edge of their seats while also in stitches.”

A2 will produce The Governator TV series and 3-D movie and manage the global licensing, merchandising and distribution. Archie Comics will publish the comic series in print and digital forms under the new brand label Stan Lee Comics. Stan Lee, his producing partner Gill Champion, and POW! will oversee all creative direction and story development.