A new half-hour animated comedy based on the quarter-hour Golan the Insatiable installments on Animation Domination High-Def will premiere on Fox on Sunday, May 31 at 9:30 p.m. ET/PT. This marks the first ADHD project to land a primetime series order.

The longer format series features an all-new voice cast as it follows mighty godlord Golan (Rob Riggle), who has arrived in Oak Grove, MN from his home in an alternate dimension. His only friend in this reality is a macabre nine-year-old girl named Dylan (Aubrey Plaza), who constantly urges him to wreak havoc on her town. Additional voice talent includes Ken Marino, John DiMaggio, Maria Bamford, Rachel Butera and Nick Rutherford.

Golan the Insatiable was created by TV newcomer Joshua Miller and developed by Matt Silverstein and Dave Jeser, who previously collaborated on Axe Cop and Drawn Together. Nick Weidenfeld and Hend Baghdady exec producer with Silverstein and Jeser, with Miller as co-exec producer. The series is produced by Weidenfeld’s Friends Night in association with Double Hemm. 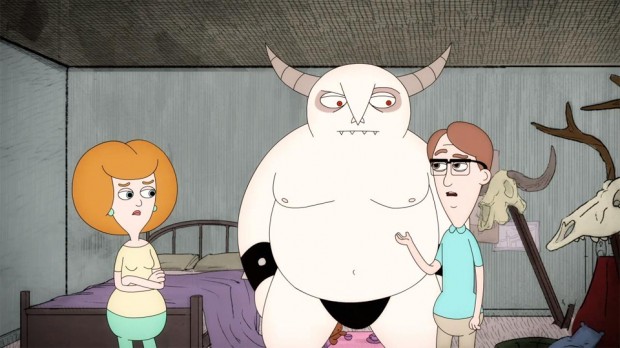