Paris-based producer/distributor GO-N Productions has kicked off production on a new animated series, Tib & Tumtum (52 x 13 min.), with the participation of TF1 (France) and in coproduction with KiKA and HR for ARD (Germany). Aimed at kids ages 5-8, the series is adapted from the comic book by Flora Grimaldi and Nicolas Bannister, published in France (Editions Glénat), the US, Italy and the Nordics.

“Tib & Tumtum offers a unique mixture of adventure, comedy with sometimes surprisingly deep and emotional moments. Albeit the series has a boy as hero, the show perfectly targets boys and girls alike, as it features strong female characters as well and conveys modern role models and equal rights for men and woman!” said KiKA’s head of fiction, acquisitions and co-productions Sebastien Debertin. “Tib & Tumtum additionally comes with beautiful, fantastic artwork and with the most impressing skies in an animated series, ever!”

Tib & Tumtum will have its World Premiere at MIP Junior this fall.

The show will introduce TV viewers to Tib, a young boy who is ostracized by the other kids in his prehistoric village due to the birthmark on his face. But Tib has something special no one else in his clan has: a dinosaur for a best friend! While it’s exciting and cool to be best buds with a T-Rex, it’s often a recipe for disaster… and making room at home for an endearing, yet gigantic and uncontrollable creature is no easy feat.

“This comedy series portrays mind blowing adventure from a child’s perspective and provides kids with a visually exciting breath of fresh air! It conveys universal values: being open to difference, personal achievement, friendship and humor, whilst taking the drama out of learning about life. Tib & Tumtum is pure kids’ entertainment but with substance!” said GO-N Prod. co-founders and producers Eric Garnet & Anne de Galard.

In addition to the leading broadcasters offering production support, Tib & Tumtum has already pre-sold to Canal+ in France, VRT in Belgium and TFO in Canada. GO-N International holds global distribution rights for the series, and will be announcing another swath of international pick-ups soon. 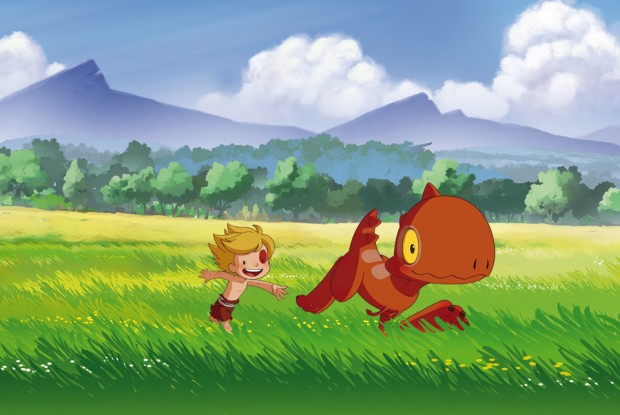