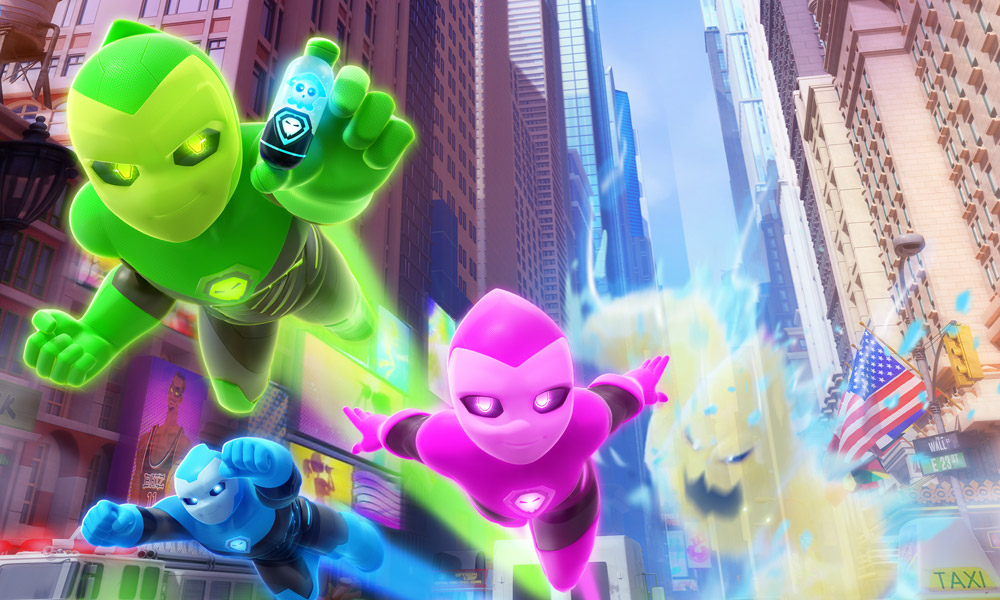 Award-winning global independent animation studio ZAG (www.zag.com) is sending its action-comedy series Ghostforce (52 x 11′) to Disney Channels U.S.; the broadcaster has licensed rights to the show in North America, Japan and India, building on existing deals for EMEA, Russia and the Middle East. Ghostforce premiered October 4 on Disney XD, with new episodes debuting weekdays at 7:30 p.m. EDT through October 15. The show has already bowed in France (TF1) and on Disney Channels in Germany and Israel. Ghostforce is co-produced with De Agostini Editores.

Created and produced by studio Founder & CEO Jeremy Zag, the supernatural series for kids 6-10 follows three junior high school students who secretly form a team of superheroes to fight the ghosts of New York. Ms. Jones, a brilliant scientist, is the founder and commander of the Ghostforce and does everything she can to better identify the ghosts and has even created a fourth member, Glowboo, an Artificial Intelligence running on phantom energy. With each mission, Liv, Andy and Mike transform into Myst, Fury and Krush, superheroes armed with the powers of the ghosts they capture and high-tech gadgets invented by Ms. Jones. They are the only ones who have the ability to hunt down the ghosts and fight them … before they hurry back to school so they don’t miss the next science class! 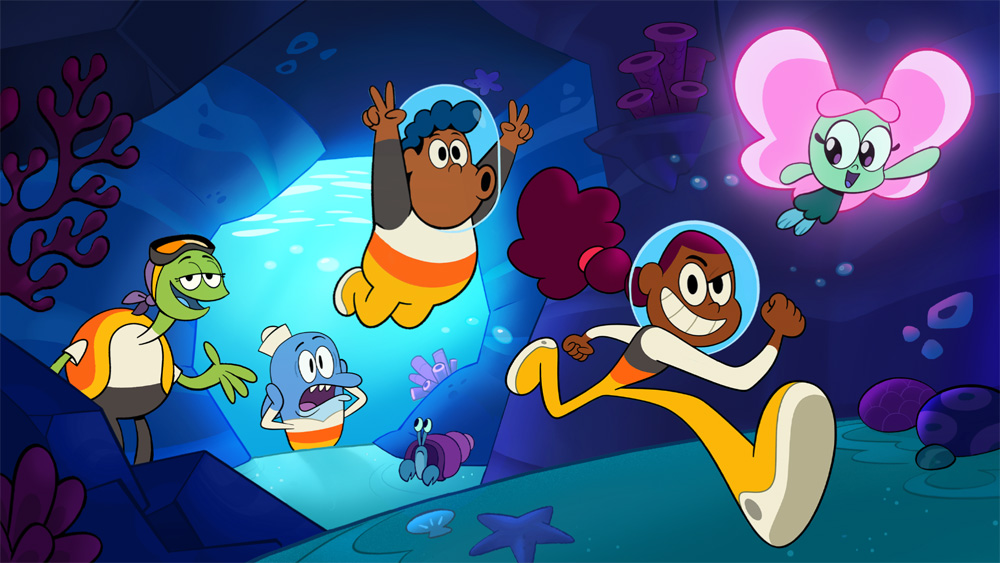 Toronto-based kids and family content producer Guru Studio (www.gurustudio.com) announced a new broadcast deal with Nickelodeon U.K. for its newest series, Big Blue. The 52 x 11′ underwater adventure comedy was commissioned by CBC Kids and Radio-Canada and is set to premiere in Canada later this year, and on Nicktoons in the U.K. in January 2022. Previously announced broadcasters already on board include ABC Me in Australia, CTC Kids in Russia, and NRK in Norway.

Created by Ghanaian-Canadian artist Gyimah Gariba, one of Animation Magazine‘s Rising Stars of 2020, Big Blue follows sibling underwater adventurers Lettie and Lemo who lead a quirky submarine crew with a magical ocean fairy stowaway named Bacon Berry. Together, they just might unravel the mysterious secrets of their underwater universe! Guru Studio is the animation studio behind global hits PAW Patrol, True and the Rainbow Kingdom and Emmy-nominated series Justin Time. 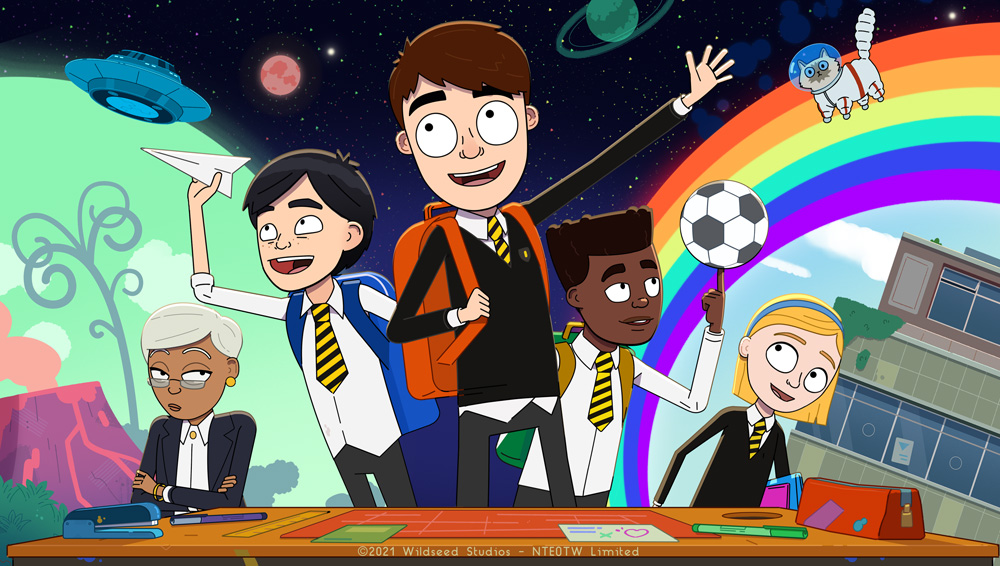 Leading kids’ and family entertainment specialist CAKE announced a deal with WarnerMedia Kids & Family for Wildseed Studios‘ animated kids’ comedy series Dodo. Based on the multi-award-winning short film and YouTube hit Not the End of the World by British creator and series director Jack Bennett, Dodo (20 x 11′) perfectly depicts the drama and unwieldy memories every child experiences during middle school. The series will air on HBO Max and Cartoon Network in 2022.

Dodo is a funny, heartwarming portrayal of everyday school life through the eyes of 11-year-old Joe Connolly as he navigates the pitfalls of his first year at high school. The smallest events mean big drama for Joe who is just trying to fit in. He may have lost his school trousers or sent a text message to the wrong girl, but with his friends Frisbo, Pete and Lily at his side he somehow triumphs over adversity and lives to see another school day. 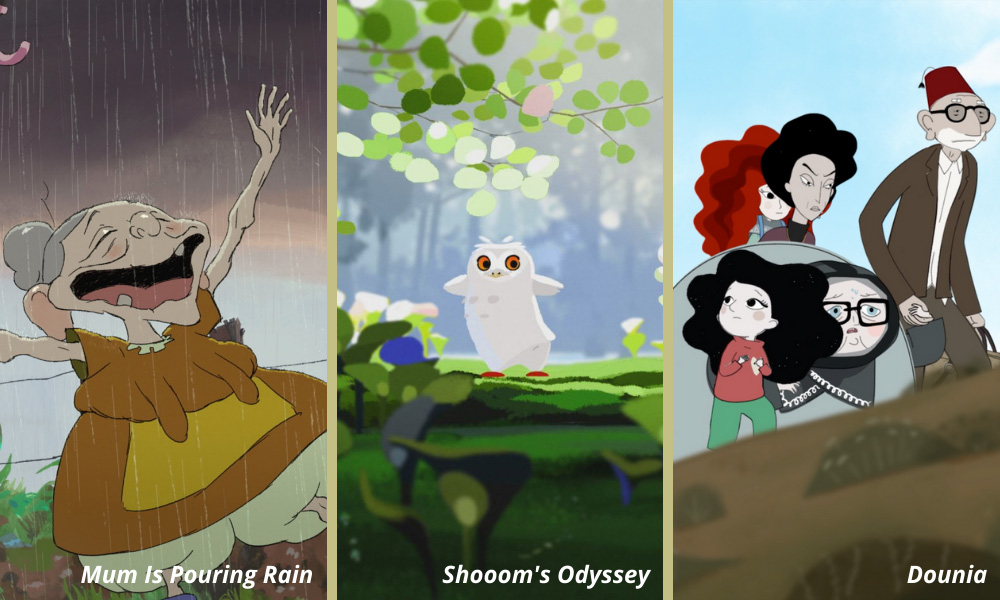 Emmy Award-winning French animation production and distribution company Dandelooo announced it will be showcasing three of its half-hour, 2D-animated TV specials featuring strong female leads as the “Resilience Collection.” Co-founder Emmanuèle Pétry Sirvin said, “We are so proud to bring creator driven films with strong meaningful stories which give children emotional tools to face the possible challenges of life. Each story from the resilience collection is beautifully written and aims to empower and help overcome life’s little obstacles.” 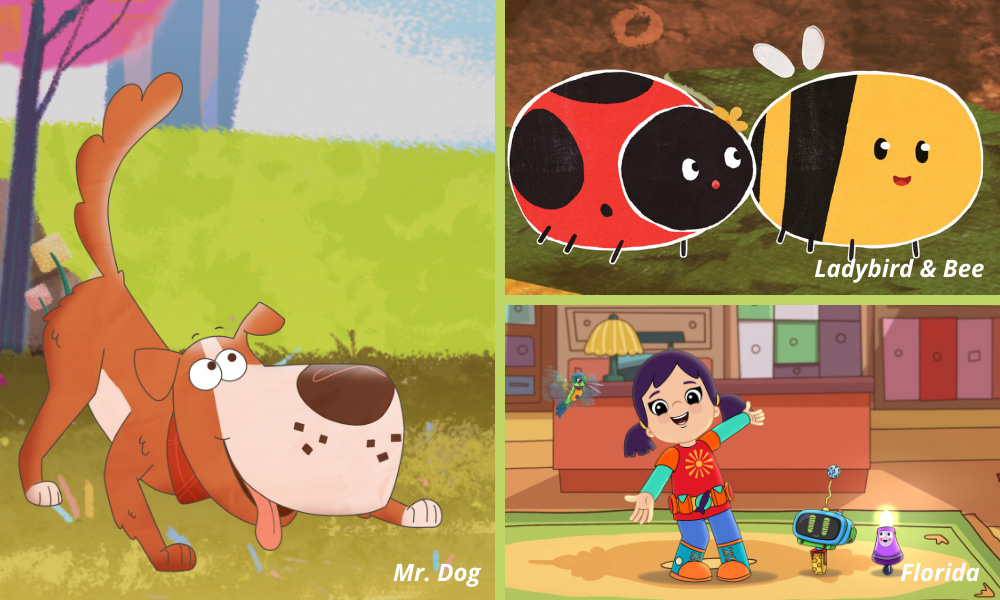 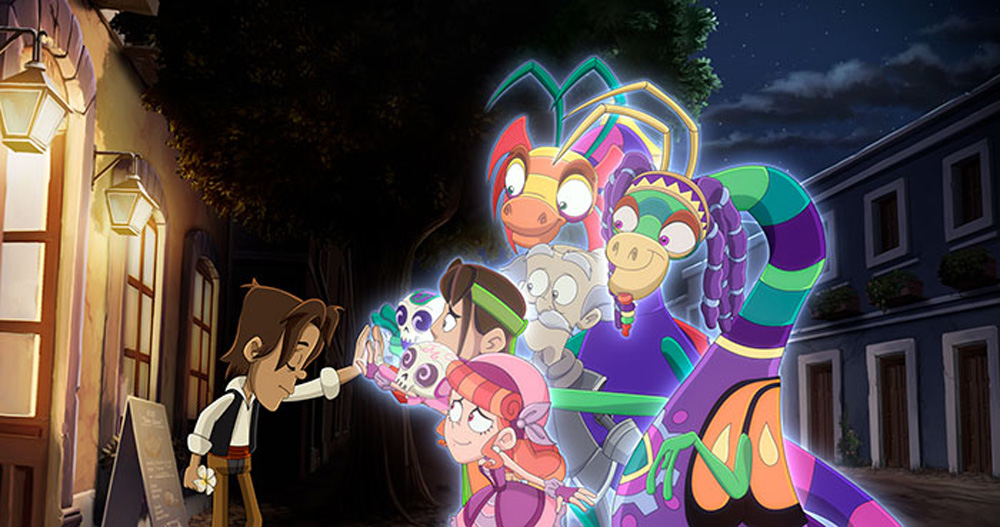 The Legend of Charro Negro

Leading Latin American animation studio Ánima, in association with Mexico City-based distributor Videocine, has reached an agreement with The Walt Disney Company Latin America for distribution rights through Disney+ in Latin America to the studio’s “La Leyenda” (a.k.a. “Legend Quest”) horror-comedy movies: The Legend of Llorona (75′), The Legend of the Mummies (84′), The Legend of Chupacabras (82′) and The Legend of Charro Negro (85′). The deal was announced by Ánima founding partners Fernando De Fuentes Sainz, CEO, and José C. García de Letona, COO.

Las Leyendas titles follow the adventures of Leo San Juan, a heroic preteen boy who can communicate with legendary creatures and ghosts, along with his team of monster-battling friends who aid him in uncovering the mysteries behind these unruly beings. While confronting their supernatural forces of evil, Leo is often compassionate, sometimes taking pity on the creatures he must stop. Yet, in spite of his caring nature, he and his friends embark on mysterious adventures as they try to save the world from evil. 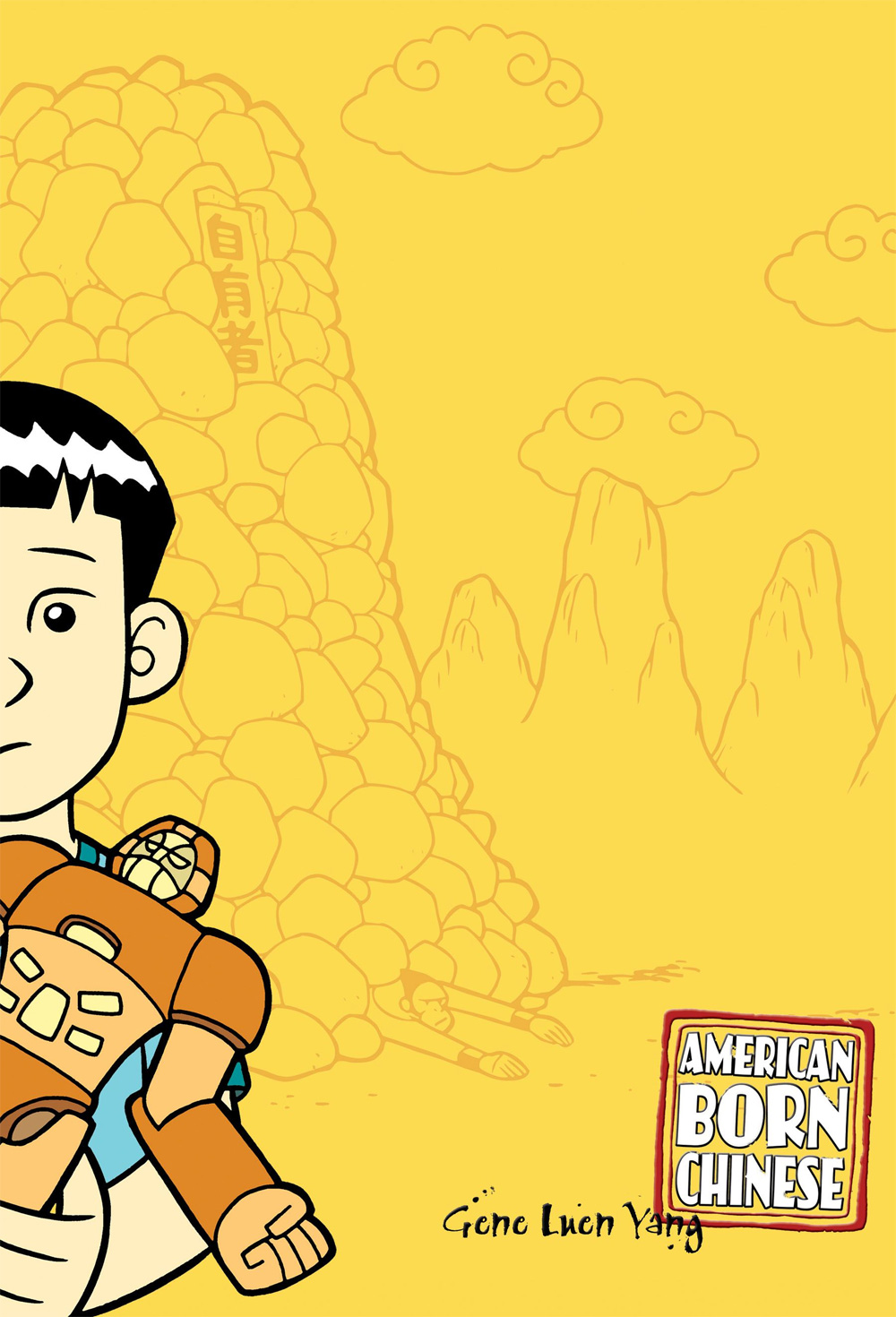 Disney+ has greenlit American Born Chinese, a genre-hopping, live-action, action-comedy series, based on the graphic novel of the same name by Gene Luen Yang. The story centers on Jin Wang, an average teenager juggling his high school social life with his immigrant home life. When he meets a new foreign student on the first day of the school year, even more worlds collide as Jin is unwittingly entangled in a battle of Chinese mythological gods. The show is a genre-hopping action-comedy that explores issues of identity, culture, and family. The Disney Branded Television series is produced by 20th Television.

FriendZSpace is about three best friends, Alice, Leo and Kim who may seem like regular human kids, but behind their normal facade they are risk-taking deep space friend makers! Each episode follows the three kids as they jet into space in their unpredictable star cruiser, “The Dart”. Accompanied by BotDog (half puppy and half high-tech Swiss army knife) their mission is simple and wonderfully weird: locate planets, find alien kids, introduce themselves, and make friends. But making friends with alien kids is tricky!