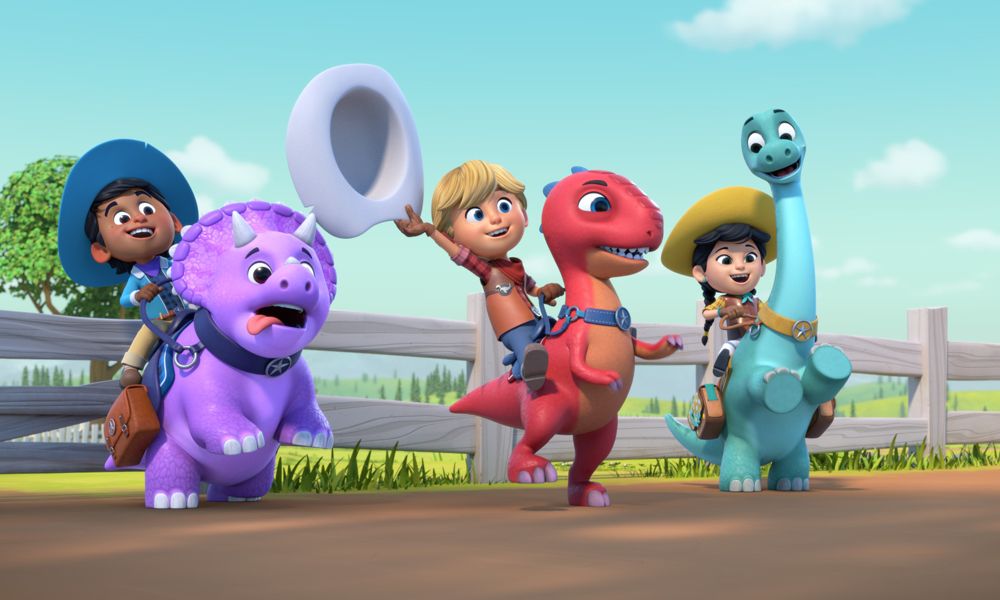 A thrilling world of wide-open spaces and incredible prehistoric creatures is ready to unfold for preschool-aged viewers as Dino Ranch makes its U.S. debut January 18 on Disney Junior and DisneyNOW. The new CG animated series, produced by Industrial Brothers and Boat Rocker Studios, follows the tight-knit Cassidy family as they tackle life on their ranh/dinosaur sanctuary in a fantastical “pre-westoric” world.

With the show ready to roar, we caught up with Industrial Brothers Creative Director & Co-Founder and series creator Matthew Fernandes (Remy & Boo, Top Wing, Kingdom Force) to learn more about his latest animation adventure. Plus, the ranch hands were able to rustle up a special clip just for Animag readers, in which adopted siblings Jon, Min and Miguel make some upgrades to the pterodactyl barn!

Can you tell us a bit about the origins and inspirations for the show?

Matthew Fernandes: I grew up in farm country as a boy and spent much of my days outside with friends, surrounded by cows, horses and the great outdoors. The one thing I learned about observing farm life was that the adults depended heavily on their family to make the farm successful. The stronger the family, the stronger the farm. What was interesting to me was that just as much as the adults counted on each other to handle important jobs, they also counted on the children to help. So, I had always been interested in doing a story about kids on a family ranch. Of course, I have always had a love of dinosaurs, so the idea of mixing the two felt really fresh and unique for this age group.

When did you start working on the series and how long did it take to produce?

Every show is different and has its own journey making it to the screen. Dino Ranch was, however, the fastest transition from idea to production that I have ever experienced. At every stage people just immediately understood the concept and could see the potential. I only created the concept a few years ago so the process was very quick. Thankfully we have a wonderful team of artists and storytellers that eagerly jumped on board. 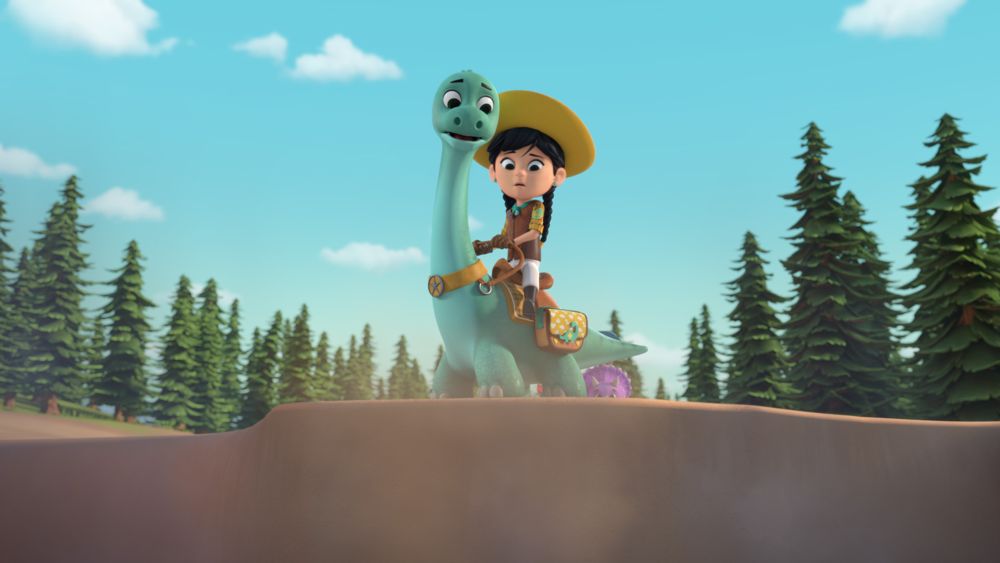 Where is the animation produced and which animation tools are used to produce it?

The series is produced by Industrial Brothers and our partners at Boat Rocker Studios. The production work is split between our studios in Toronto with animation being done at Jam Filled out in Ottawa. Our pipeline is primarily a mixture of Maya and Arnold.

How many people work on the show?

What about the show makes you proudest?

There is so much to love about the show itself, but I’m most proud of the level of ownership our creative teams had for the series and the level of commitment and craftsmanship that went into making it. At every stage, our team tried to raise the bar in order to make something special. 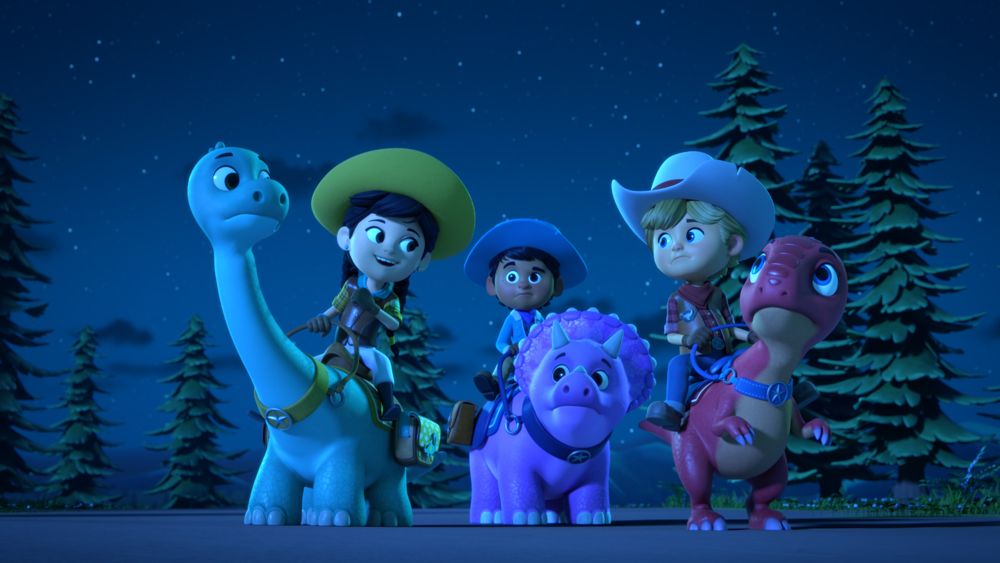 What were the biggest challenges for you on this project?

The challenge with production is matching your creative vision with your budget and schedule, and it’s often a back-and-forth dance between the two. What made this production a challenge was the number of dinosaurs in our world interacting with our characters. Our dinosaurs carry so much personality so there were a lot of very unique performances to manage in order to pull the scenes off. Thankfully, our team was up for the challenge and went above and beyond our creative vision for the show.

What is your take on children’s animation in 2021?

That’s a great question. We live in confusing times and it has been challenging for many families at home and many businesses that have felt the effects of COVID. The animation industry has been one of the few lucky industries that has managed to continue on with production and adapt to a remote lifestyle. First and foremost, I think we have a responsibility to not only entertain families at home but also to create content that can help children understand these new complex feelings and interpret the world that is currently around them. I hope that Dino Ranch will offer parents and their preschoolers with irresistible escapism to the wild frontier.

COVID has also forced us all to become remote studios, and for some, it has proven to be very successful. I think like many companies we can begin to question the idea of what office life means and I think there are now opportunities to rethink a traditional production workspace. 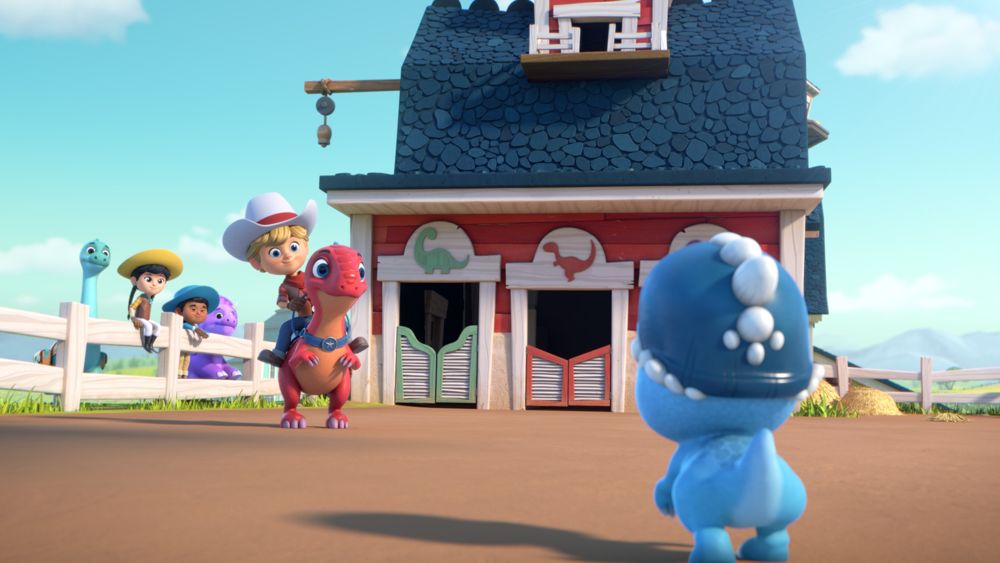 How has the scene changed since the days of Dex Hamilton?

Wow. Well, that is a name I haven’t heard in a very long time. Dex Hamilton was the first show I ever created and so much has evolved in the scene since that time, both personally and in the animation scene. Directly after Dex, I founded Industrial Brothers with my business partner, Arthur Spanos, with a goal of making cool stuff for kids. Ten years and nine shows later, we are still trying to push the envelope, both creatively and technically, to produce premium content. But it feels like, in the last few years, 3D animation has only continued to become faster, more innovative and more accessible. What you are able to produce on a television budget was unheard of back in the days of Dex Hamilton and, with the processing power that we are seeing from game engines, we are on the verge of a big evolution in animation.

What do you hope audiences take away from Dino Ranch?

I believe that we have created a really unique action-packed, dino-sized world that kids will want to be a part of. With wide-open natural green spaces and big blue skies, viewers will be transported to a place where they can discover the exhilarating blend of dinosaurs, outdoor adventures and ranch life for themselves. But also, for me, Dino Ranch is about family. While we have a lot of fun with the ranchers and their dinosaurs, it all comes back to the importance of family, strength and unity in our lives.

Dino Ranch launches on Disney Junior and DisneyNOW in the U.S. on Monday, January 18. Learn more about Industrial Brothers at www.industrialbrothers.com.