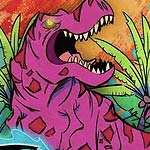 The adult comedy series, Hollywould follows the exploits of two washed up screenwriters as they work towards their long overdue comeback. Mr. Wiggles Saves the World centers on a normal, everyday family who has a secret government operation hiding in their basement, and a family dog that saves the world from aliens. Dinosaur Attack follows Steven and Mawni on their action adventure as they are suddenly thrust into epic battles against giant holographic and robotic dinosaurs.

“Gas Money Pictures already has an established presence in live-action films and television so it was a natural evolution to take the next steps in bringing these new characters to life in the animated realm,” says James L. Bills, CCO of Gas Money Pictures, “We are looking forward to further establishing ourselves in the US market as well as expanding internationally into Europe and China.”