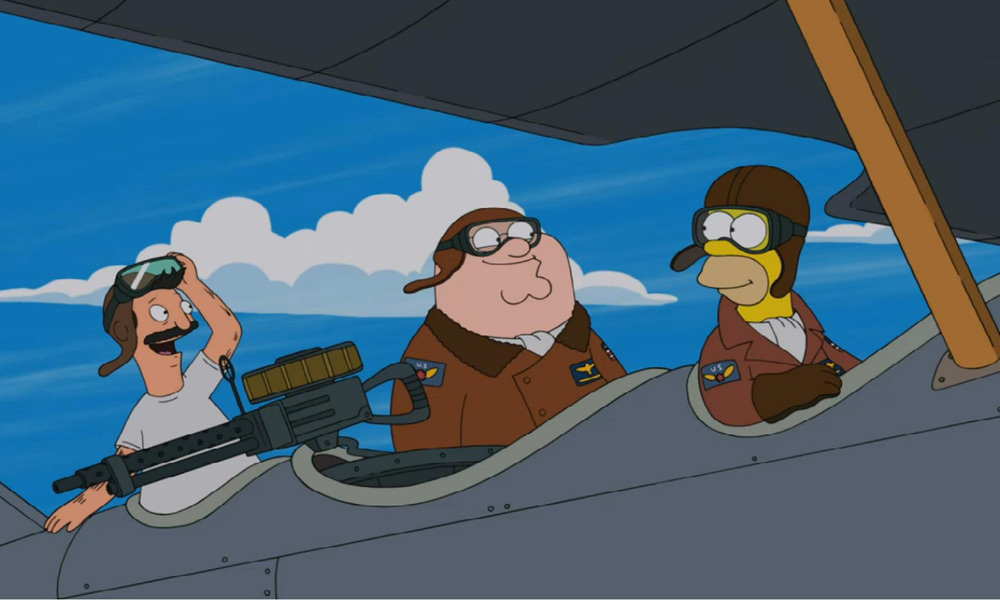 The patriarch of Bob’s Burgers made a cameo in the Family Guy/Simpsons crossover episode in 2014. All three series will run on FXX soon.

FX Networks has won out in a tussle to secure off-network rights to hit FOX animated series Family Guy, starting with the 16th season (2017-18), which will bring the Seth MacFarlane series to air on FXX starting next week. Deadline broke the news. The channel is already the off-network home to animation icon The Simpsons, which it picked up 2013, as well as the new base for FX original hit Archer.

FX will be sharing Family Guy reruns with Freeform, its new sibling channel under the Disney-Fox acquisition. Peter, Lois and the rest of the Griffin gang will move in at FXX on April 16, where it will air Tuesdays (9-11 p.m.), Thursdays (12-1 a.m.) and Sundays (7-9 p.m.) paired with The Simpsons. Freeform will offer Family Guy in a one-hour block on Wednesdays, starting April 17.

Another long-running animation favorite from FOX will arrive on FXX this fall, as FX Networks has also inked an off-network deal for Loren Bouchard’s Bob’s Burgers, starting with the current ninth season. So, Family Guy seasons 16 and 17 (a new season will be added every year, with more hours per week until FXX becomes the exclusive cable partner for all previous season less Freeform’s portion). The complete Bob’s Burgers library will come under FX’s control in a couple of years.

Family Guy and Bob’s Burgers are currently renewed through to 2019-20 — seasons 18 and 10, respectively — and expected to continue. Older episodes of both series currently air on Turner’s Adult Swim, which shares them with TBS. These deals cover seasons 1-15 of Family Guy and seasons 1-8 of Bob’s Burgers. The FX deals include limited online distribution, as streaming rights to both shows are owned by Hulu.