This summer’s all-new season on Comedy Central will mark the (second) final chapter of Matt Groening’s sci-fi animated comedy, Futurama. The 13-episode run, which will bring the series total to 140 episodes, will premiere on the channel with back-to-back episodes Wednesday, June 19 at 10 p.m. ET/PT, with the series finale set for September 4. Special guest stars for the farewell season include Larry Bird, Dan Castellaneta, Sarah Silverman, George Takei, Adam West and Burt Ward. The show’s entire original voice cast will be returning.

“I’m very proud of the upcoming season. If this is indeed the end of Futurama, it’s a fantastic finish to a good, long run,” said creator and EP Groening in a statement.

Comedy Central will be celebrating the final raft of space-faring adventures with bonus content on cc.com, including weekly episode previews, highlights and photo galleries featuring concept artwork from upcoming episodes. The site also hosts clips from the entire library of Futurama episodes and exclusive interviews with the show’s cast, as well as Groening and David X. Cohen, plus a “making of an episode” mini-documentary.

Later this month, Comedy Central will kick off the summer-long “Countdown to Futurama” social networking extravaganza on the show’s Facebook page, which boasts over 26 million “Likes,” earning it a top spot among TV pages on the site. The Countdown will feature new and exclusive daily content, including clips, episode stills, character designs and more. Additionally, the celebration will extend to Comedy Central’s Tumblr, which will offer a “Futurama Fanarama” spotlighting fan tributes to the series and its final season.

Originally airing on Fox from 1999-2003, Futurama came back from the beyond with four direct-to-DVD movies in 2007 which subsequently aired on Comedy Central. Based on their success, Comedy Central revived the series in 2010. The show has earned six Emmy Awards (including two Outstanding Animated Program honors), seven Annie Awards, two Environmental Media Awards and two Writer’s Guild of America Awards. 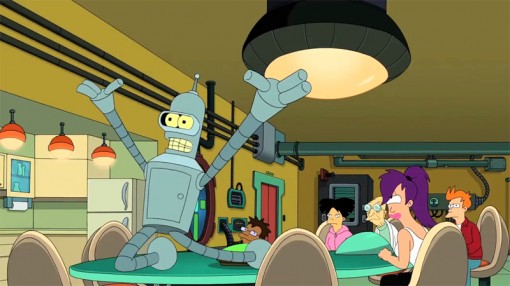