Comedy Central is planning a big multi-platform blitz to promote the seventh season of Futurama, which begins on June 20th at 10 p.m. First up, there’s the special “Countdown to Futurama” campaign on Facebook, which begins today (May 1) and goes on for 50 days, providing fans with exclusive content including preview clips, character designs, episode stills, story boards and more each day. For the countdown kick-off, there will be a sneak peek clip from the season premiere episode, “The Bots and the Bees.” The show’s Facebook page has over 20 million fans and ranks among the top five animated television show pages.

Beginning on Monday, May 7, CC Digital will also feature the first of seven weekly podcasts, which will include a week’s worth of “Countdown to Futurama” content. Hosted by executive producer and creator David X. Cohen, who will be joined by a rotating cast of other  show writers and producers, this feature will provide viewers with inside commentary on each piece of exclusive content along with a first look at images from upcoming episodes, as well as character designs, stills, storyboards and concept sketches. The Futurama weekly podcasts will only be available on iTunes.

Comedy Central will integrate the Futurama countdown on-air and online, including a daily feature on the CC Insider blog, the CC Tumblr page and on mobile via SMS messaging. 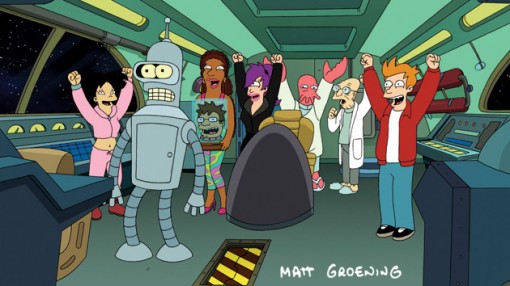