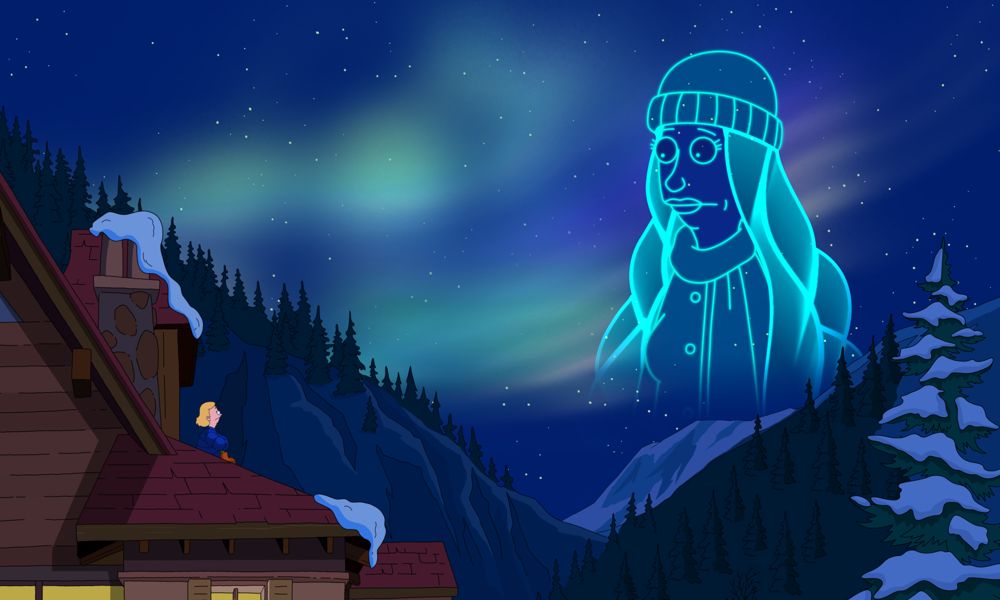 The Loren Bouchard TV animation empire continues to expand this month with the arrival of The Great North, a FOX primetime show exec produced by Bouchard (Bob’s Burgers, Central Park) and co-created, written and exec produced by Wendy and Lizzie Molyneux and Minty Lewis.

The hugely likable series, which carries the familiar visual stamp of Bouchard’s other favorites, centers on the eccentric and lovable Tobin family who have recently moved to a small town in Alaska. The clan is led by single dad Beef Tobin (voiced by the inimitable Nick Offerman), older son Wolf (Will Forte) and his girlfriend Honeybee (Dulcé Sloan), middle brother Ham (Paul Rust), youngest brother Moon (Aparna Nancherla) and only daughter Judy (Jenny Slate). The cast also includes Judy’s new boss at the mall, Alyson (Megan Mullally), and her imaginary friend Alanis Morisette, who is voiced by the famous Canadian singer herself. We recently had a chance to chat with the in-demand, Emmy-winning Molyneux sisters about their fun new toon. 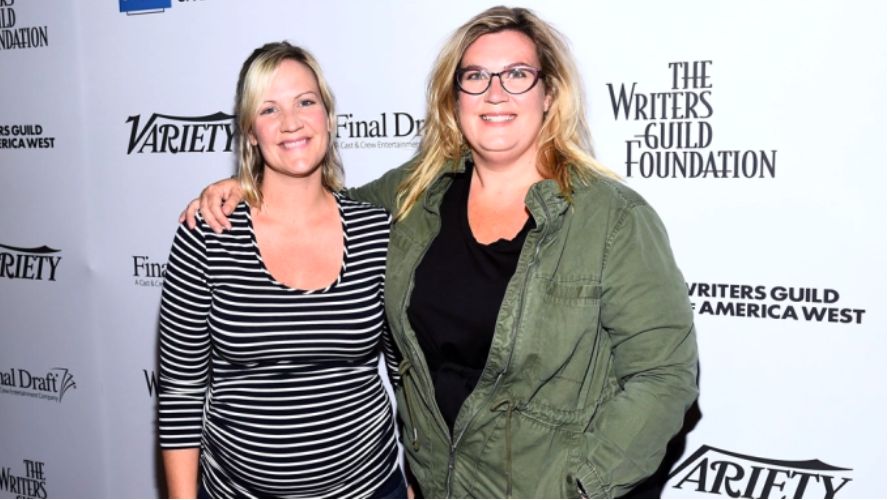 Wendy and Lizzie Molyneux, who have been writers on Bob’s Burgers since its debut in 2011, began talking about doing a new show with Bouchard about three years ago. “It all grew out of talking with Loren about ideas for a new series, and we kind of started thinking about actors that we would love to build a show around,” recalls Wendy. “We knew Nick [Offerman] for over a decade. We had worked with him and Megan [Mullally], and I was a writer on The Megan Mullally Show. They’re kind of personal muses of mine. And Jenny Slate was someone that Lizzie and I had always admired from afar. The next question was, how do we make another show that feels and looks different from Bob’s Burgers, but has the same kind of heart, warmth and funniness — which is a very high bar. We wanted to feel like we were going somewhere completely different, so slowly, this idea of a single dad and his family living in Alaska came together.”

Lizzie says although she and her sister are still working on Bob’s Burgers and helping in the writers’ room, their dream was to build a little branch out of the Bob tree. “Before the stay-at-home months, we all worked in the same building, and many of the same team at Bento Box work on the two shows. We have the same directors and artists, and it has been a real dream come true for us.” 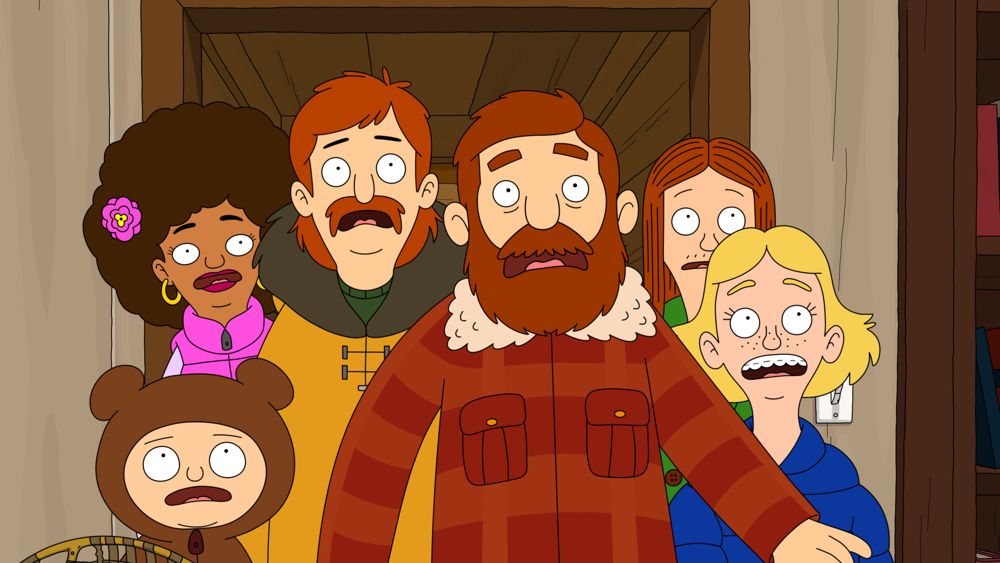 Counting the sisters themselves, The Great North has an overall writing staff of 14. Altogether, about 90 people work on the show at Bento Box. “We found a wonderful group for the show,” says Wendy. “We’ve been working from home for the past 11 months, and it’s kind of weird to start a totally new job during the year of the pandemic alone in your apartment. But everyone is a trooper, and it’s kind of funny when everyone can see your bedroom as you pitch the show. It’s all about how much of yourself you can reveal at work!”

A lot of the show’s backdrops were based on the reality of what Alaska looks like. “It was exciting for us because it’s so beautiful, vast and different than the environments most people are used to living in, and it lends itself very well to animation,” says Lizzie. “There are so many stories that we can explore in animation that we really can’t do in live action. There are glaciers, and animals that we don’t encounter in our day to day lives. Of course, our family has a fairly normal life, they are not surviving in the wilderness. I have been to Alaska, and it does feel like a completely unique place. You walk into your driveway and you are so close to these mountains covered with snow and glaciers. We did a lot of research, and some of our artists actually traveled there to get a first-hand look.” 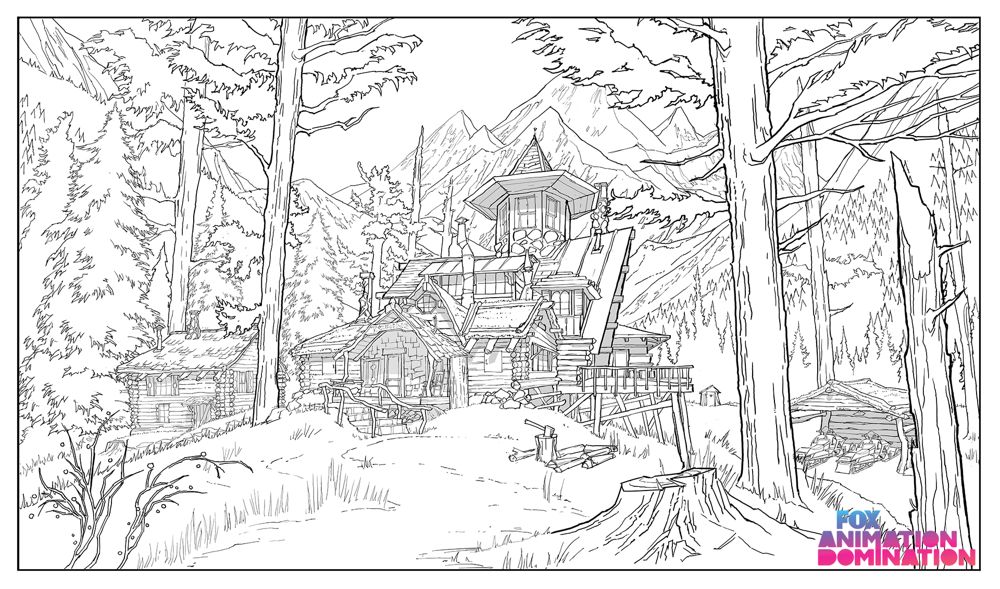 The two sisters, who grew up in Indiana, recall spending much of their childhoods playing and exploring nature, and they wanted to recreate those same experiences for their characters. “My siblings and I (we have two brothers and one other sister) used to go to the woods and imagine all these fun adventures,” says Wendy, who is the older sister. “We share the same sense of humor and think the same things are funny, so that helps with how we work together. Our sister Jenny is our parent’s favorites, though. If Jenny gets a show, then all bets are off!”

Lizzie adds, “We have a lot of shared memories and inspirations for our stories, so that gives us a shorthand when we work. It comes from being part of a big family and those shared experiences help us with coming up with ideas for the show’s plotlines and situations.”

The Molyneuxs both grew up watching animated shows such as The Simpsons, and continued as they grew older with adult fare such as South Park. Wendy recalls, “My brother and I are closer in age, and I remember how we loved watching shows like Space Ghost and Dr. Katz, and it’s funny, because I was watching the shows of my future boss and had no idea that one day our lives would intersect. I remember we were just desperate to get a writing job before we got the chance to write for Bob’s Burgers. I mean we even interviewed for a Pauly Shore reality show. It was like, ‘Please give us a job. We need to buy food!’ So when we got the chance to make a presentation for Bob’s Burgers, we felt like the Hugh Grant character in Notting Hill. We thought, there’s no way she’s going to fall in love with us. And we ended up getting Julia!” 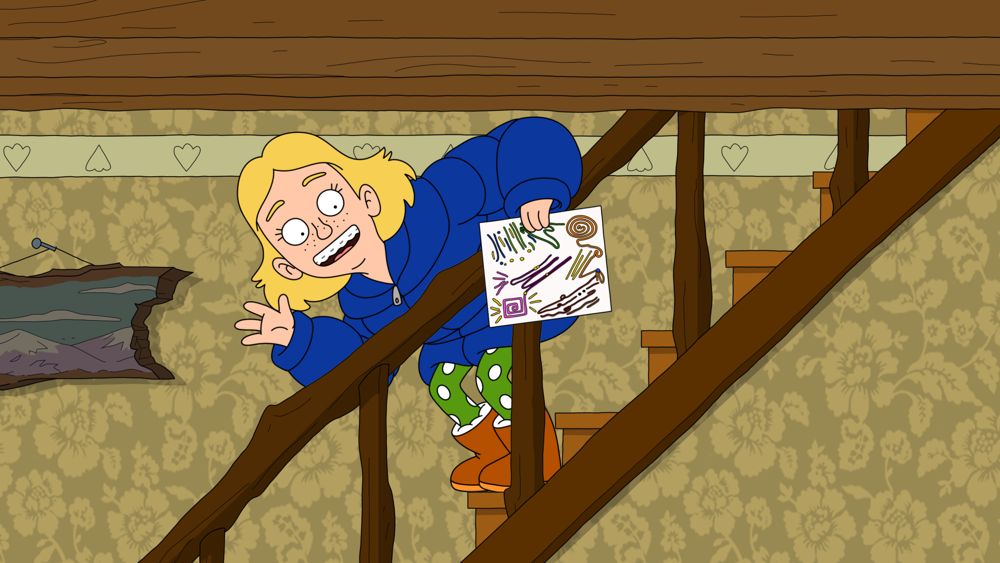 “We thought Bob’s Burgers was the funniest thing we had seen,” says Lizzie. “There’s no way they are going to hire us. But here we are, and we’ve been doing it for 10 years now. I think animation is such a fun medium to work in. It gives you so much freedom and you meet a lot of different, talented people. It’s amazing to see your idea for a work come to life visually two or three years later. You can go anywhere and do anything — if the artists don’t kill you for giving them so many backgrounds to work on!”

Wendy explains that because both she and her sister come from the writing side, they are constantly impressed by what the artists and animators are able to do. “I cannot draw at all, for me it feels like I’m working with wizards. I tell them, ‘Oh my God. You are a witch. How can you draw that? It’s magic!’ I mean, you can dream up this elaborate fantasy sequence and then you see it rendered and it’s a thousand times better than you imagined with colors that you can’t even think of. Our artists really blow our minds every day!”

The sisters also praise Bento Box and Bouchard for having the vision and insight to promote diversity at the studio. “There is diversity across the board,” says Wendy. “The studio recruiters have done a great job in terms of opening the doors and bringing in people and growing them. The demographics have changed drastically. People are hungry to see different points of view. There were always lots of women working in Loren’s camp. Animation used to have a reputation for being a forbidding place for women, but the more women are hired, the friendlier it gets for everyone.” 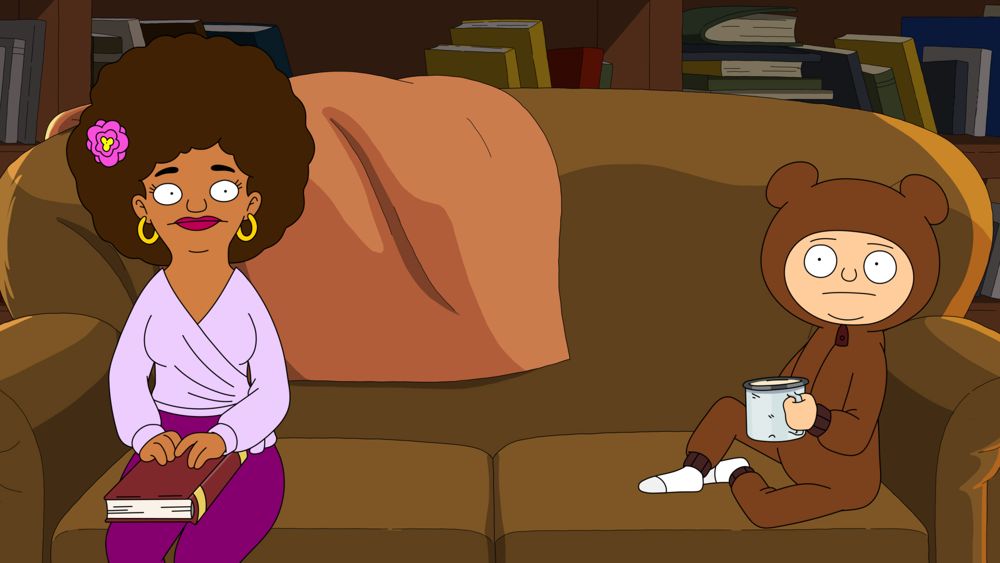 Lizzie adds, “There used to be this assumption that women are not as interested in watching animation. As someone who has grown up watching animation and loved it, I know that’s not true. We know that a lot of women are watching it. Younger women are identifying more with characters like Tina on Bob’s Burgers. There are lots of female fans of animation who want to see characters like themselves on shows and to work on them. Things have improved over the past few years, and it’s true that animation is a world for anyone.”

The siblings, who were also tapped to write the third Deadpool movie (with Ryan Reynolds acting and producing) hope they can bring some laughs and humor into people’s lives with their new animated family. “We are in the middle of a pandemic and everyone’s stuck at home,” says Wendy. “Our number one goal is to make people laugh and make them feel more relaxed.” Lizzie chimes in, “We hope people can turn to this family and find a show that has a lot of heart. That’s what we loved about our time on Bob’s Burgers. So we took what we know and hope that we were able to create this world that feels similar in tone and sweetness.”