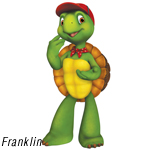 Popular preschool character Franklin is turning 25 this year, and Corus Entertainment, Nelvana Studio and Treehouse are getting ready to celebrate with a new animated series titled Franklin and Friends.

The new series will debut on Canada’s Treehouse channel March 4 at 6 p.m. ET, and is part of a broader celebration of the character’s legacy that includes a special edition of the original storybook, Franklin in the Dark, and there-release of 12 classic Franklin stories.

“Corus has a long history with Franklin, from the award-winning books published by Kids Can Press to the internationally successful classic television series produced by Nelvana,” said Doug Murphy, executive VP and president of Corus Television. “We are proud to commemorate this milestone by issuing never-before-seen material in a special edition of Franklin in the Dark and by giving our audiences an updated version of the series with new CGI-animation on Treehouse.”

Corus Entertainment’s Nelvana Enterprises has also secured sales of the series to TF1 in France, Minimax in Eastern Europe, YLE TV2 in Finland, NRK in Norway, TVN in Poland, Discovery Channel in Latin America, Spacetoon in Indonesia, among others. Licensing opportunities are also available through Nelvana Enterprises.

You may also like...
Related Topics:Canada, Corus, Franklin and Friends, Nelvana, Treehouse