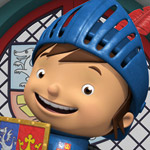 Mike the Knight looks like he’s on his way to France.

Co-producer Nelvana is finalizing a deal with TF1 for the French channel to air the CG-animated series for preschoolers.

Ready for delivery this fall, the 52 x 12 minute series was created by Alexander Bar and written by Marc Seal. It follows a heroic medieval knight whose rallying cry is, “Be a knight, do it right!’

“Along with our co-production partner HIT Entertainment, we are thrilled TF1 has acquired Mike the Knight,” said Colin Bohm, VP and managing director, Nelvana Enterprises. “With its truly unique and exciting storylines, along with rich visuals, we are confident the series will be a big hit with preschoolers and their families around the world,”

Mike the Knight will air in Canada this fall on Treehouse, with more international broadcasters to be announced soon. Nelvana Enterprises has broadcast and home entertainment rights in Latin America and France, as well as broadcast rights in the U.S. HIT holds the rights in all other territories globally.

You may also like...
Related Topics:Corus, HIT Entertainment, Mike the Knight, Nelvana, TF1