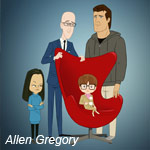 Fox TV’s new animation lineup sees the awkward teens of Napoleon Dynamite get a toon makeover, and Jonah Hill as a sophisticated schoolboy in Allen Gregory.

In the next few months, Fox TV audiences will be treated to two new kids on the channel’s animation block: Napoleon Dynamite and Allen Gregory; both crafted in 2D, and both aiming to bring something new to primetime cartoons.

According to Jared Hess—who directed the 2004 live-action film with his wife, Jerusha—Napoleon came about due to fan (and studio) demand for a sequel. “The film was like a one time thing,” says Hess, who is executive producing the show with Jerusha and The Simpsons veteran Mike Scully. “We loved the character so much and knew if we ever did continue Napoleon’s world, the best way to do it would be animation because they could live a little longer and not age. And it’d be fun to explore Napoleon’s interests and adventures in a crazier way, which you can do in animation.” The process began about two years ago, and after a nine-minute presentation last year, Fox handed them an order for six episodes. 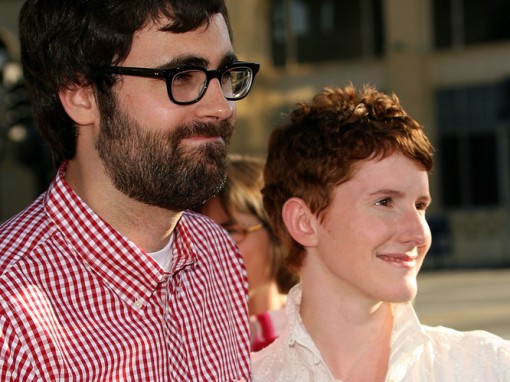 Fans of the cult hit will be glad to know that the original cast is back to voice their animated counterparts in Napoleon—Jon Heder stars with Aaron Ruell, Efren Ramirez, Tina Majorino, Sandy Martin, Jon Gries and Diedrich Bader (first season guest stars will include Jennifer Coolidge, Sam Rockwell and Jemaine Clement). To craft the toon version of Preston, Idaho and its inhabitants, the team turned to Rough Draft Studios in Glendale, Calif.

“The film was kind of like a live-action cartoon to begin with!” Hess notes. The director, who has also helmed live-action indies Nacho Libre and Gentlemen Broncos, credits the Rough Draft crew with nailing the character designs—citing the way Napoleon’s awkward physicality is animated—and capturing details of the live sets. “I think the people who live in Preston, Idaho will be kind of weirded out by how accurate and detailed their town is as an animated world,” Hess muses, adding that he ended up providing the animators with all the set photos shot during production to help construct the cartoon Preston. 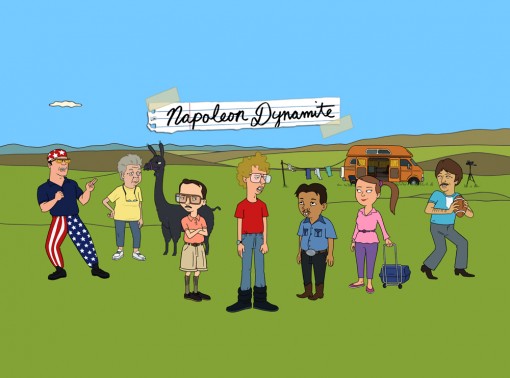 According to Claudia Katz, producer at Rough Draft, Napoleon is created by a team of 50-60 artists with Storyboard Pro, Toonz and Maya for cel-shaded CG—used for car chases, panning backgrounds and what she describes as “spider hijinx” in a sequence involving thousands of CG spiders. Each episode takes about six months from script completion through final animation.

Thanks the studio’s expertise and blend of techniques, the awkward teen outcasts of Napoleon are able to experience adventures of which their flesh and blood inspirations would never have dreamed. Scully picks out an episode where Napoleon gets a job at liger breeding facility and accidentally sets them loose as a key example. “Shooting a liger rampage in a live-action film would be very expensive, and there’s not as many good liger actors as you might think,” he quips. 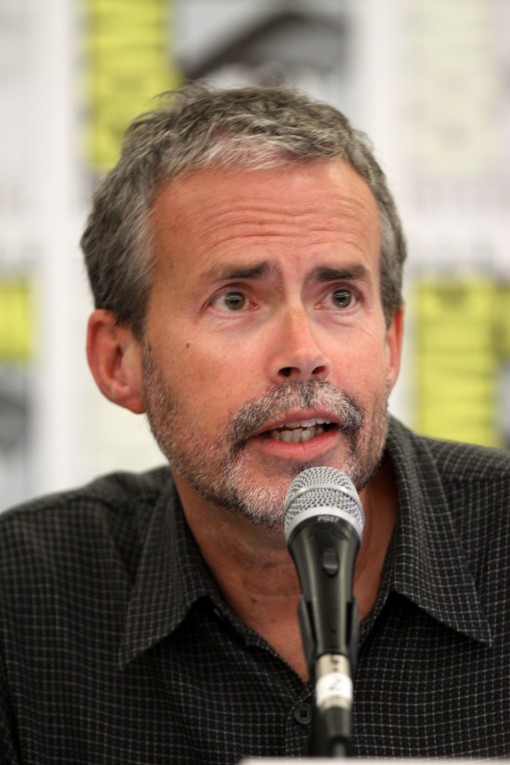 One of the biggest challenges for the Napoleon creators was finding a way to translate the unique comedic feel of the film into something that worked for TV animation. “The pace of the show does clip along a little bit better, but it still has a lot of integrity to the awkward humor that was in the film—the awkward pauses,” notes Hess. “We’re discovering along the way how to maintain that without making it exactly like the film.”

While Scully asserts that he has tried to balance his live-action and animation writing experiences, he notes that his 18 years working on The Simpsons prepared him for transitioning Napoleon from film to cartoon immensely. “The fact that the characters are so unique and have such distinct voices really helped,” he adds, “And Jared and I kind of agreed on what had to be changed—making it more visual than the film, and doing more things to justify that it’s animated.”

Wise Beyond His Years

Coincidentally, Allen Gregory was also born out of a live-action concept. The main character, a stuck up, hyper-intelligent and unnervingly mature seven-year-old boy cruelly thrust into the common sphere of elementary school, is an echo of a character created for an unproduced film starring Jonah Hill, who voices Allen Gregory in the series. “We wrote a movie that Jonah was going to do and it fell apart at the last minute, bu the three of us got to know each other,” explains Jarrad Paul, who co-wrote the film with Andrew Mogel and now serves as co-creator/EP with Mogel and Hill. 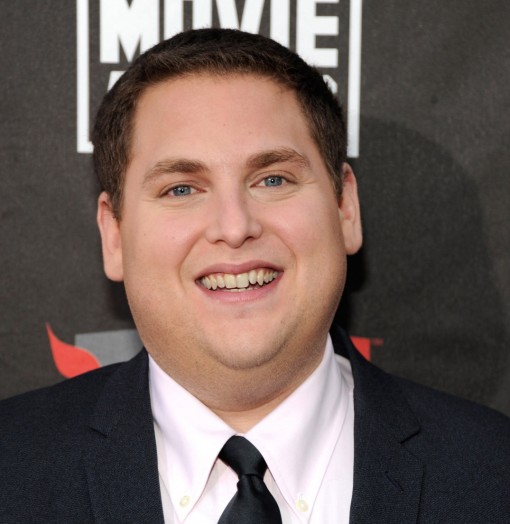 For Allen Gregory, Paul and Mogel—new to the animation scene after working together on the script for 2008’s Yes Man—wanted to approach the show from a writing and tonal standpoint, with subtle acting and comedy similar to their live-action work. “We wanted it to look more human and real, like it was out of the New Yorker or something,” Paul, who is also an actor, explains. Mogel adds that this was especially true for the Allen Gregory character, who needed large, emotive eyes and exacting facial animation. Show-runner and EP David A. Goodman, who has worked on both live and animated projects including Family Guy in the past 20 years, notes that Allen Gregory underwent the most design tweaking between the original presentation a year ago and production.

Keeping with their live-action comedy vibe, the show is shot in a much more cinematic way than traditional animated sitcoms, Goodman explains. The creators wanted it to feel like the camera was really in the scene, utilizing complicated sequences of over-the-shoulder, close shots, cuts between characters and master shots to establish a filmic feel. 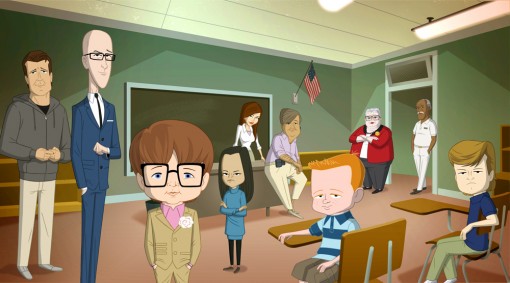 Allen Gregory is being animated by Bento Box Entertainment. According to co-founder/principle Mark McJimsey, a proprietary Toon Boom process blending Storyboard Pro, Final Cut and Harmony is utilized to guide each episode from pre-production through color delivery. Seoul-based Yeson Entertainment animates with a team of about 60 artists, sending digital “Dailies” as they go, and the completed episodes are then sent to Fotokem via a high speed pipeline for post production. Fox’s initial order of seven episodes are currently in production.

For Paul and Mogel, adjusting to the pace of TV animation has been a major challenge, though they concede the longer production times (McJimsey notes that turnaround is about 31 weeks from recording to delivery) allow them to fine-tune jokes and storylines that would already be in the wind on a live show. The producers also remark that the levels of interpretation involved in moving from script, to storyboard to the animation team overseas can be suspenseful. 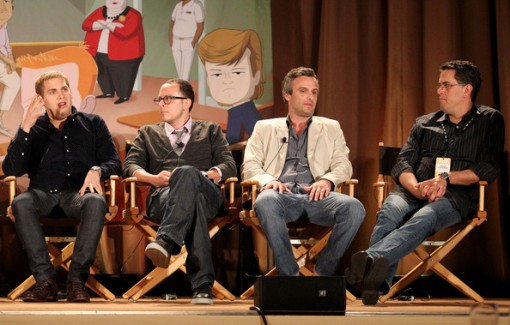 “There’s moments when [the animators] have to interpret comedic things that they probably don’t even get, culturally,” Mogel marvels; though both point out they have been extremely pleased with what has come back so far.

“It’s much easier to tell Scarlett Johansson, ‘Do this with your face,’ and show her what to do,” adds Paul.

“What I love about this show is the singular voice that Jarrad and Andy and Jonah have created,” says Goodman, who has written for over a dozen series, adding that Allen’s crush on the principal and the back story of Allen’s two dads were what struck him the most. “I couldn’t believe it when I read it, and that has continued now with the series; finding these comedic boundaries and crossing them.” 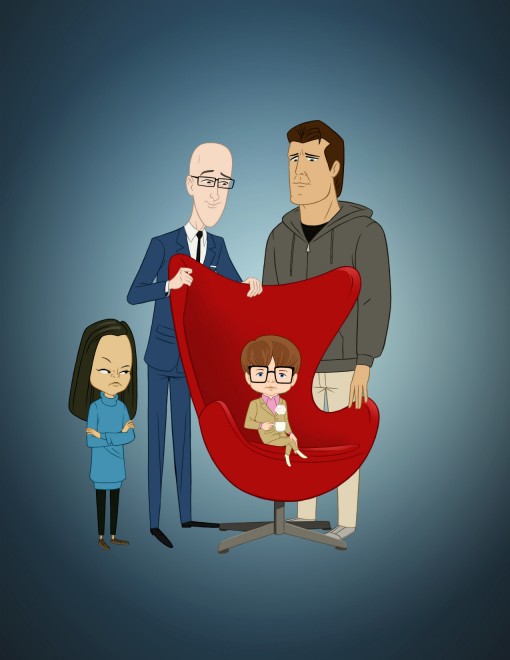 Both series are hoping to hit a note of timeless humor, but as each of these creators—all with experience in the live-action sphere—attest, it’s character and story that really count. As Napoleon’s Scully sums it up: “I think, sometimes, what people forget about [Napoleon Dynamite] is that it has a tremendous amount of heart. These people are such a dysfunctional group of people it would be easy to just make fun of the characters, but the tone is so sweet and funny that the characters are very endearing.” Fox will find out soon whether Allen Gregory and Napoleon Dynamite will endear themselves to its audience.

Gods of Animation Smile at MTV
A Fin-de-Siècle Fantasy: ‘A Monster in Paris’