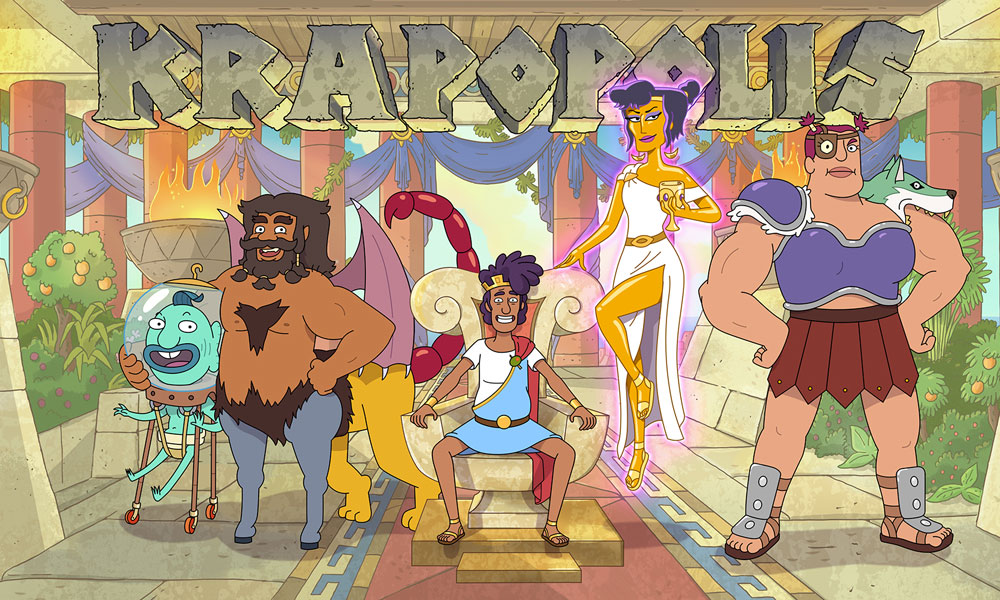 Emmy Award nominee Hannah Waddingham (Ted Lasso), Richard Ayoade (The IT Crowd), Matt Berry (What We Do in the Shadows), Pam Murphy (Mapleworth Murders) and Duncan Trussell (The Midnight Gospel) have joined the voice cast of Krapopolis, FOX’s new animated comedy set in mythical ancient Greece, from Emmy Award-winning creator Dan Harmon (Rick and Morty, Community). The show centers on a flawed family of humans, gods and monsters that tries to run one of the world’s first cities — without killing each other.

Ayoade voices “Tyrannis”, the mortal son of a goddess. He’s the benevolent King of Krapopolis trying to make do in a city that lives up to its name. Waddingham plays “Deliria,” Tyrannis’ mother, goddess of self-destruction and questionable choices. Within her extended Olympian family — forged in patricide and infidelity — she’s known as the trashy one. Berry is “Shlub,” Tyrannis’ father, a mantitaur (half centaur [horse + human], half manticore [lion + human + scorpion]). He is oversexed and underemployed, claims to be an artist and has literally never paid for anything, in any sense of that word, for his entire life. Murphy voices “Stupendous,” Tyrannis’ half-sister, daughter of Deliria and a cyclops. Trussell plays “Hippocampus,” Tyrannis’ half-brother, offspring of Shlub and a mermaid — and, obviously, a hot mess, biologically speaking.

The series is an outgrowth of the direct animation deal Harmon and FOX Entertainment unveiled last year. Wholly owned and financed by FOX Entertainment and to be produced by FOX’s Emmy Award-winning animation studio, Bento Box Entertainment, the project also is the first series to move forward under FOX’s broadcast direct model. Additionally, Krapopolis will serve as the first-ever FOX/Bento Box animated series curated entirely on the blockchain.

The company will launch a dedicated marketplace for Krapopolis that will curate and sell digital goods, ranging from NFTs of one-of-a-kind character and background art and GIFs, as well as tokens that provide exclusive social experiences to engage and reward super fans. An NFT of the Krapopolis cast image is minted on the Eluvio content blockchain with token metadata. FOX Corp. announced a strategic investment in the platform at the end of August.