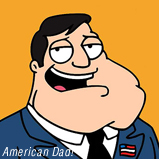 Fox has renewed its animated comedy series American Dad! for a seventh season.

The series — created by Seth MacFarlane, Mike Barker and Matt Weitzman — is currently airing its sixth season. The order will see the show run into 2012.

The series, produced by Fox Television Animation, stars the voices of MacFarlane as Stan Smith and Roger, Wendy Schaal as Francine, Rachael MacFarlane as Haylee and Scott Grimes as Steve.

Debuting in 2005 in a post-Super Bowl spot on Fox, American Dad! celebrated its 100th episode this past season and is part of Fox’s Sunday-night Animation Domination block.

You may also like...
Related Topics:American Dad, Fox, Seth McFarlane