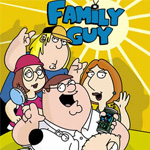 Fox-TV can’t get enough of Seth MacFarlane. The network has announced that it has ordered a tenth season of Family Guy and a fourth one for its spin-off toon The Cleveland Show. Fox recently placed a seventh season renewal for MacFarlane’s other Sunday night show American Dad. The network’s freshman Sunday night toon Bob’s Burgers, created by Loren Bouchard has also been renewed for a second season

“For nine seasons, our viewers have been cracked up, delighted, surprised and, at times, gloriously disturbed by the mind of Seth MacFarlane — and they keep coming back for more,” noted Fox entertainment president Kevin Reilly. “The Griffins and the Browns have become cornerstones of our Sunday nights, and we can’t wait to find out what new adventures Seth, Mike and Rich cook up for them next season.”

According to The Hollywood Reporter, Sunday’s episode of Family Guy (6.5 million, 3.2) was the highest-rated on Fox. The season finale of Cleveland Show airs this Sunday. An hour-long finale is also planned for Family Guy on May 22, during which the Griffin clan return to a galaxy far, far away.

Here’s a popular clip from the show: