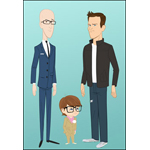 Fox is ramping up its animated offerings by giving orders to an animated Napoleon Dynamite series and an original idea called Allen Gregory, reports Variety.

The network has ordered six episodes of Napoleon Dynamite, which will feature as writers and executive producers Jared Hess, Jerusha Hess and Mike Scully of The Simpsons fame.

Allen Gregory is about a famous 7-year-old kid who has to go school with normal kids.

Fox has ordered seven episodes of the series, which is written by Jonah Hill, Andrew Mogel and Jarrad Paul. All three will serve as executive producers along with Peter Chernin and Katherine Pope of production company Chernin Entertainment.