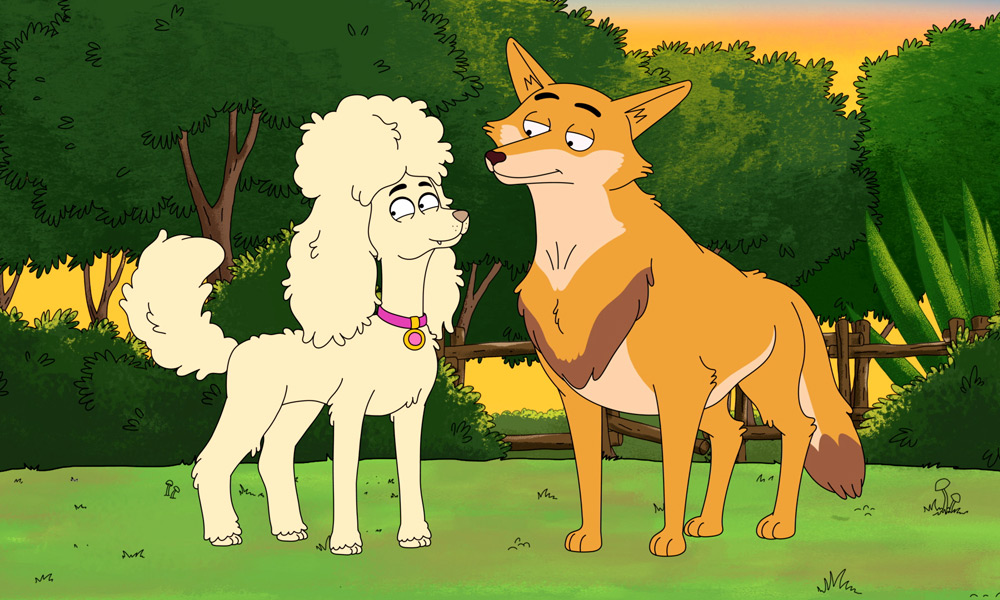 FOX has renewed the animated hit comedy HouseBroken for a second season. The brainchild of Veep colleagues Gabrielle Allan, Jennifer Crittenden and Clea DuVall, and featuring the voices of Lisa Kudrow, Clea DuVall, Nat Faxon, Will Forte, Tony Hale, Sharon Horgan, Jason Mantzoukas and Sam Richardson, HouseBroken follows a group of neighborhood pets and stray animals as they work through their issues inside and outside their therapy group.

“HouseBroken has quickly established itself as an important part of Animation Domination,” said Michael Thorn, President, Entertainment, FOX Entertainment. “In fact, the only animals funnier than our own pets are the members of HouseBroken‘s incredibly talented cast. Gabrielle, Jennifer and Clea have delivered big comedy and surprising characters using this wonderful group of animals to make fun of the neuroses in all of us. Bento, Kapital and FOX look forward to many more hilarious episodes featuring this amazing ensemble.”

HouseBroken more than doubles its Live + Same Day audience, delivering 2.2 million Multiplatform viewers, a lift of +126% from L+SD. It is FOX’s #2 most-streamed freshman animated series across Hulu and FOX NOW.

In the all-new “Who Are You?” episode airing Monday, Aug. 9 (9:00-9:30 PM ET/PT), Coyote (guest voice Brian Tyree Henry) asks Honey (Kudrow) to run away with him to Altadena and she agonizes over the decision. Meanwhile, Diablo (Hale) chooses to live with his carefree dad and Max (Hale) learns he’s not the original “Max.” Also, Nibbles (guest voice Bresha Webb) brings an annoying mouse (guest voice Sarah Cooper) back from the dead. Watch a sneak peek clip here.

In the series, Honey (Kudrow), a standard poodle, opens her living room for the group to come and support each other through the misery, mayhem and majesty that is being a pet. Honey also struggles with her own problems, such as her arranged (by her human) marriage with Chief (Faxon), a sloppy St. Bernard who enjoys eating socks and licking himself. The group includes Shel (Will Forte), a sex-positive tortoise with intimacy issues and a knack for choosing unconventional partners; Tabitha (executive producer Sharon Horgan), an aging Persian cat beauty queen, trying to adjust to life off the cat show circuit; The Gray One (Jason Mantzoukas), a street smart cat who lives with about thirty other cats and has his one eye on Tabitha; Chico (Sam Richardson), a chonky, co-dependent and very naive cat; and the group’s newest member, Diablo (Hale), an anxious, sweater-wearing terrier whose OCD causes him to hump everything twice.

Among the group’s other members are Elsa (co-creator/EP Clea DuVall), a power hungry, know-it-all Corgi, and fake service dog, who drives Honey crazy; Nibbles (Webb), a psychopathic hamster who is mourning the loss of her mate (whose face she ate … and everyone knows it); Max (Hale), George Clooney’s pig, a former actor and current status-obsessed a-hole; Bubbles (guest voice Greta Lee), a horny, teenage goldfish who lives with Honey and Chief, and heckles the animals any chance she gets; Tchotchke, a silent, and possibly magical, slow loris with a mysterious past, who uses a tiny cocktail umbrella to express his emotions; and Jill (guest voice Maria Bamford), Honey and Chief’s human owner.

HouseBroken is produced by Kapital Entertainment and FOX Entertainment. It is created and executive-produced by Gabrielle Allan, Jennifer Crittenden and Clea DuVall. Sharon Horgan, Clelia Mountford, Aaron Kaplan and Dana Honor also serve as executive producers. The series is animated by Bento Box Entertainment. Follow the show on social @HouseBrokenFOX.

Read more about the series in Animation Magazine‘s article here!