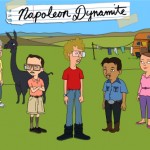 This week, Fox-TV unveiled the latest plans for its Sunday Night Animation Domination block. In September, the cabler will premiere Allen Gregory at 8:30 p.m., right after The Simpsons. Created by Jonah Hill, Jarrad Paul and Andrew Mogel and exec produced by David Goodman, the show follow the adventures of a smug seven-year-old celebrity who has to go to school with normal kids.

Here is the network’s new trailer for the show:

Then, in November, fans of the 2004 indie film Napoleon Dynamite can look forward to an animated TV version of the film, starring Jon Heder. Heder, Efren Ramirez (Pedro), Aaron Ruell (Kip) and Jon Gries (Uncle Rico) Jared Hess, who co-wrote and directed the feature is an exec producer and writer, as well as his wife Jerusha, who also co-wrote the film. Mike Scully (The Simpsons) is a writer/producer on the show. Here’s Fox’s promo:

What is your initial reaction to these two new Fox offerings? Do you love ‘em, hate ‘em, can easily live without them?