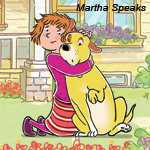 WGBH Boston and DHX Media have begun production on the fourth season of the popular PBS KIDS animated preschool show Martha Speaks. The first episodes of the new season will be delivered in December 2011 and are set to air on PBS KIDS in Winter 2012. This brings up the number of episodes available to 80 half-hours.

“We are delighted that Martha Speaks has been greenlit for a fourth season,” said WGBH Senior Executive producer Carol Greenwald.  “We have watched Martha’s audience grow each season — currently reaching an average of 4.5m people on air each week and 745K online each month in the U.S. — and we look forward to creating new adventures for Martha to share with our audience.”

A co-production from WGBH Boston and DHX Media, Martha Speaks is an animated show aimed at 4-7 year olds, based on the best-selling books by Susan Meddaugh. The series follows the adventures of a loveable dog whose appetite for alphabet soup gives her the power of human speech. DHX Media represents worldwide TV and home entertainment rights outside of the United States.