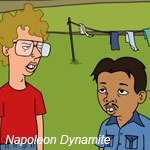 Fox’s animated version of Napoleon Dynamite got a boost in its debut from strong ratings for the NFL playoffs Sunday night.

Early numbers reported by Deadline.com have the series premiere of the show posting a 4.6 rating/11 share, that likely will slip down to 4.5 when final numbers are out. That makes the show the third-highest-rated new comedy premiere of the season, after Two Broke Girls and New Girl.

The  site also reports that Napoleon Dynamite almost doubled the debut numbers posted in the same 8:30 p.m. slot earlier this by the now-defunct Allen Gregory. A second episode of the show aired at 9:30 p.m. and posted a 3.6/8.

Also getting a boost from increased viewership were Fox’s other animated series, The Simpsons (6.8/16) and Family Guy (4.4/10). Both were up, with Simpsons in the previous week earning a 2.3/5 and Family Guy earning a 3.1/7 last week.

If you were one of the many who tuned in, let us know in the comments what you thought of Napoleon Dynamite. Did it live up to the hype, or should it be voted out with Pedro?