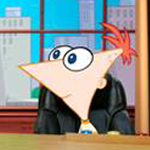 Disney’s been pretty up front about making animated duo Phineas & Ferb into a major franchise, and takes the next step by having the duo follow in the footsteps of the venerable Space Ghost and host an animated talk show titled Take Two with Phineas and Ferb.

Here’s a look at the premiere episode’s interview with Jack Black:

And a chat with Saturday Night Live comic Andy Samberg:

Let us know what you think. Are Phineas and Ferb the next Conan O’Brien, or the next Chevy Chase?