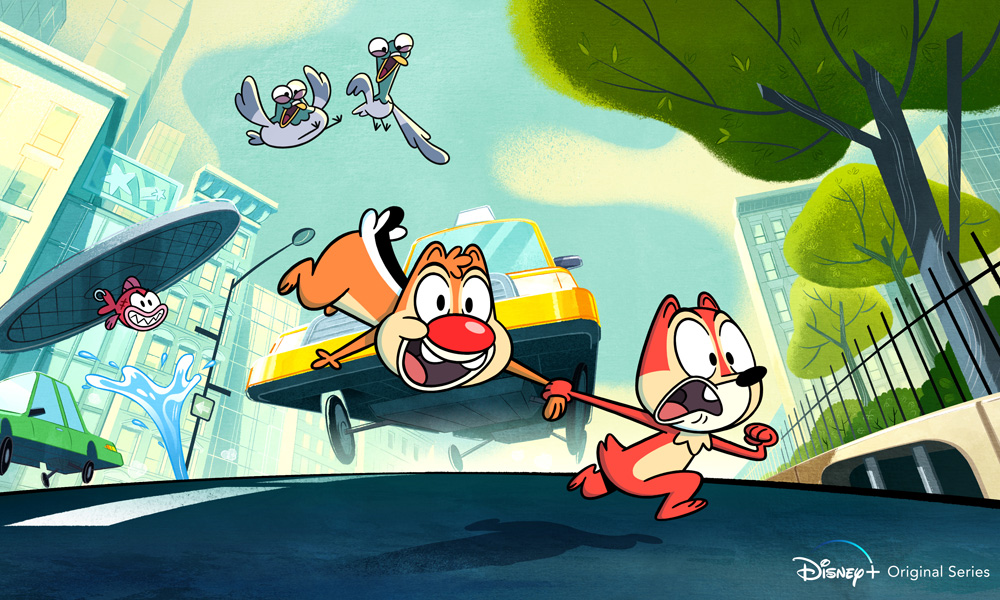 Today at Annecy International Animated Film Festival, Disney announced the original series Chip ‘n’ Dale is in production for the streaming service and shared a first look at the logo for the upcoming original series Monsters At Work.

The show is developed by Disney’s London-based animation team in collaboration with Xilam Animation (Oggy and the Cockroaches, I Lost My Body, Mr. Magoo) in Paris. The series will be fully produced by Xilam, an award-winning independent production studio known around the world for visual invention and cartoon comedy. The 39 x seven-minute episodes will feature the return of Disney’s much-loved chipmunk troublemakers in a non-verbal, classic style comedy, following the ups and downs of two little creatures living life in the big city. Combining a traditional style of animation with contemporary, comedic narratives, Chip ‘n’ Dale is directed by Jean Cayrol and produced by Marc du Pontavice.

In addition, Monsters At Work exec producer Bobs Gannaway revealed the logo and shared more details about the upcoming Disney+ original series. Set to premiere on Disney+ in 2020, Monsters At Work stars Ben Feldman as Tylor Tuskmon, with original Monsters, Inc.voices Billy Crystal and John Goodman returning as Mike and Sulley. Inspired by Disney and Pixar’s Academy Award-winning feature film Monsters, Inc., the series picks up six months after the original movie’s story, with the Monsters, Inc. power plant now harvesting the laughter of children to fuel the city of Monstropolis – thanks to Mike and Sulley’s discovery that laughter generates ten times more energy than screams. Tylor Tuskmon is an eager and talented young mechanic on the Monsters, Inc. Facilities Team (MIFT) who dreams of working his way up to the factory Laugh Floor to become a jokester alongside his idols Mike and Sulley. The series was developed and is executive produced by Disney animation veteran Bobs Gannaway (Mickey Mouse Clubhouse, Planes: Fire & Rescue) with Ferrell Barron (Planes: Fire & Rescue) serving as producer.

Launching in the U.S. on November 12, 2019, Disney+ will launch in the U.S. on Nov. 12, 2019. It is billed as the ultimate streaming destination for movies and shows from Disney, Pixar, Marvel, Star Wars, National Geographic, and more. The service will also be the exclusive streaming home for films released by The Walt Disney Studios in 2019 and beyond, including Captain Marvel, Avengers: Endgame, Aladdin, Toy Story 4, The Lion King, Maleficent: Mistress of Evil, Frozen 2 and Star Wars: The Rise of Skywalker. For more info, visit DisneyPlus.com.