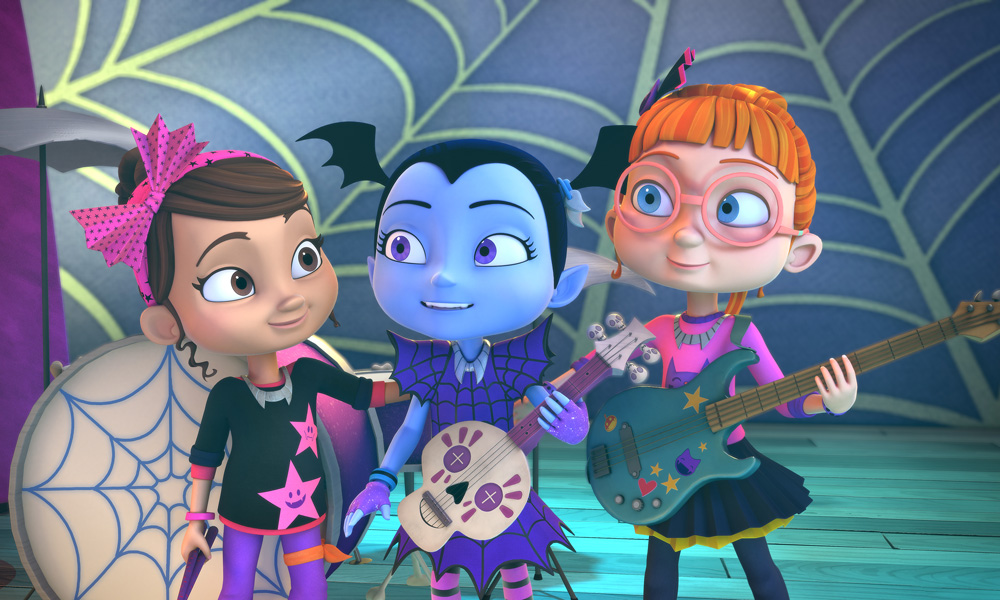 This week, the spookiest tyke on TV is getting a 2D makeover fin the new short-form series Vampirina Ghoul Girls Rock! based on Disney Junior’s hit CG preschool show, Vampirina. The shorts will start arriving Friday, August 3 at 10:55 a.m. and 11:25 a.m. ET/PT, following a special 22-minute episode of the main series titled “Home Scream Home” (10:30 a.m.), which sees Vee return to Transylvania with her Ghoul Girls bandmates, Poppy and Bridget, for a monstrously fun talent competition.

The shorts use a distinctive combination of CG and 2D Flash animation to follow the continued adventures of Vampirina and The Ghoul Girls. Ghoul Girls utilizes the veteran Vampirina talents of exec producer Chris Nee, animation studio Brown Bag Films, and series songwriters Michael Kooman and Christopher Dimond. The shorts also feature songs by the acclaimed team of Kay Hanley, Michelle Lewis and Dan Petty, who have worked with Nee on Doc McStuffins.

“The first time we heard a Ghoul Girls song in the series, we knew we had something pretty special,” Nee tells Animation Magazine. “I was so excited to see a girl band that felt like they could really play their instruments and rock out. We’re thrilled to be able to create these new shorts with full-length songs that highlight the Ghoul Girls in the context of music videos. We also loved getting to explore the amazing graphics for the shorts. The more stylized 2D look makes the girls’ performances really pop!”