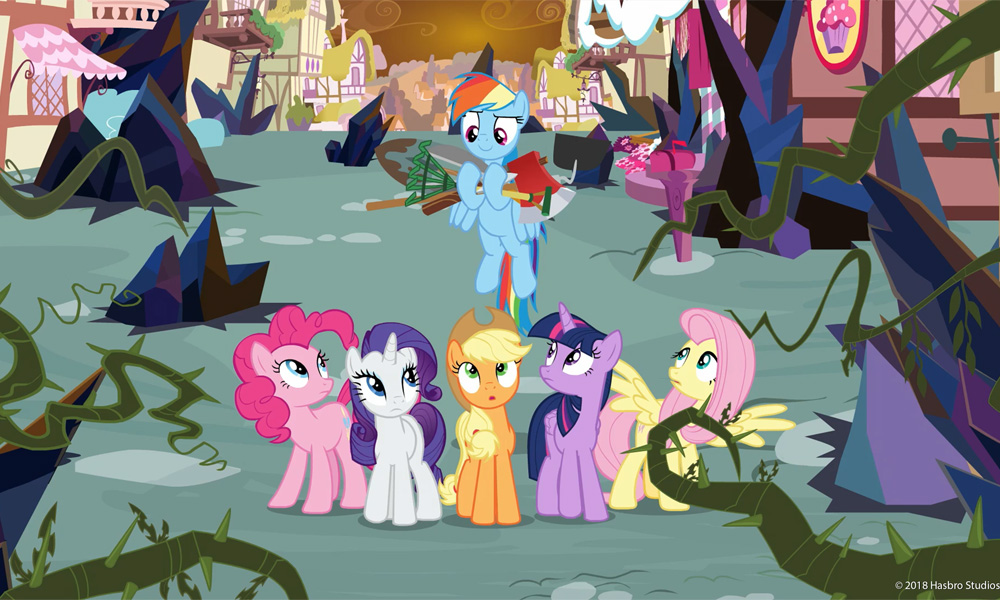 After almost a decade of gallopin’ good times in Equestria, Discovery Family has announced that the ninth and final season of My Little Pony: Friendship Is Magic will giddyup on Saturday, April 6 at 11:30 a.m./10:30 c. The 26 new episodes rounding out the Mane 6’s incredible adventures, produced by Allspark Animation, will also stream live and on demand via Discovery Family GO, the network’s TV Everywhere app.

In the back-to-back season premiere titled “The Beginning of the End,” Princess Celestia and Princess Luna decide to retire and hand off the ruling of Equestria to Twilight Sparkle and her friends, which sends Twilight into a tailspin of self-doubt. Meanwhile, an ancient villain bands together a legion of nefarious characters to conquer all of Equestria, challenging Twilight Sparkle and the rest of the Mane 6 to step in and save the day.

Leading up to the season nine premiere, Discovery Family will celebrates with a week-long “Pony Palooza” takeover starting bright and early at 6a/5c on Saturday, March 30 with a marathon of Equestria Girls specials leading up to the world premiere of Equestria Girls: Spring Breakdown at 11:30a/10:30c. Then, catch a marathon of the most magical episodes from the past eight seasons of My Little Pony: Friendship Is Magic beginning at 6a/5c on March 31 and running all week long during daytime. Fans can revisit legendary moments including the discovery of the elements of harmony, the marriage of Shining Armor and Princess Cadance, the defeat of Lord Tirek, the introduction of the Cutie Mark Crusaders, Flurry Heart and Thorax, and the opening of Twilight Sparkle’s School of Magic, all culminating with the two-part back-to-back season 9 premiere episodes.

Later this season, fan favorite characters “Quibble Pants” (voiced by Patton Oswalt) and “Cheese Sandwich” (voiced by “Weird Al” Yankovic) return to Equestria. Additionally, with brand new original songs, exciting new characters and even bigger adventures, My Little Pony: Friendship Is Magic will celebrate its 200th episode on Saturday, April 20 at 11:30a/10:30c with Twilight Sparkle and her big brother, Shining Armor, pitting their wits against each other to settle a long-standing sibling rivalry score.