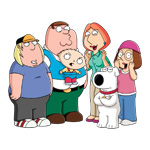 Taking a page from The Simpsons’ playbook, Fox’s animated series Family Guy killed off a major character during the “Life of Brian” episode which aired on Sunday (Nov. 25) [Spoiler alert] Fans were shocked to witness Brian the beloved Griffin family dog (who is voiced by Seth MacFarlane) being hit by a car and dying in an episode that will possibly affect the rest of the season’s storylines.

“You’ve given me a wonderful life. I love you all,” he said before leaving his family.

Many consider the Brian/Stewie relationship the heart of the long-running animated show. The two often ganged up against Griffin dad Peter and made fun of him behind his back.

As most families do after such a horrible incident, the Griffins ended up getting a new dog (voiced by The Sopranos’ Tony Sirico). The show’s exec producer Steve Callaghan told E!,

“By losing Brian, it felt like a void needed to be filled both comically, and also for the interpersonal relationships between all the characters.”

Family Guy is not the first Fox toon to kill off a major family pet. If you remember, The Simpsons lost their first cat Snowball during the show’s Christmas pilot which ran in December of ’89. Their replacement cat Snowball II was also hit by a truck. Lisa Simpson also lost two other replacement kitties, Snowball III and Coltrane. The family’s current cat is actually Snowball V, but she’s often just referred to as Snowball II. (I know…It’s all very confusing!) Their brown greyhound, Santa’s Little Helper, has remained alive through all the show’s calamities, thank God.

Update: In reaction to the episode, die-hard fans of the show have started a petition against Brian’s death. Aaron Thompson of Tuscaloosa, AL., launched the Change.org petition on Monday. He was able to collect 3,000 within hours. A Facebook page has also been created here:
www.facebook.com/BrianGriffinLivesOn which has over 350,000 fans.

“Brian Griffin was an important part of our viewing experience,” Thompson wrote on the site. “He added a witty and sophisticated element to the show. Family Guy and Fox Broadcasting will lose viewers if Brian Griffin is not brought back to the show.”

You can watch Brian’s deathbed scene and a funny/sad vomit-filled tribute here: 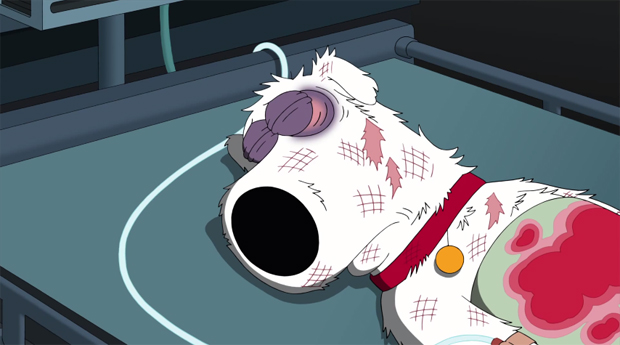 GKIDS to Release ‘Ernest & Celestine’ on March 14
Ghibli’s ‘Princess Kaguya’ No. 1 in Japan