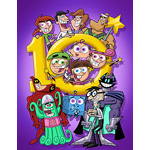 The Fairly OddParents is turning 10 years old, and Nickelodeon is celebrating by taking them into the third dimension in a live-action/CG-animated TV movie.

The first-ever project of its type for the network, A Fairly Odd Movie: Grow Up, Timmy Turner! airs Saturday, July 9, at 8 p.m. (ET/PT) on Nickelodeon and stars Drake Bell of Drake & Josh and Daniella Monet of Victorious.

The hour-long TV movie follows the adventures of a now 23-year-old Timmy Turner (Bell) who refuses to grow up in order to keep his fairy godparents. Timmy’s resolve to stay a kid forever is tested when the once gawky, now gorgeous Tootie (Monet) returns to town and he must choose between her and his beloved magical fairy godparents. The movie, from series creator Butch Hartman, also features TV veterans Jason Alexander (Seinfeld), Cheryl Hines (Curb Your Enthusiasm) and Steven Weber (Parenthood).

“I’ve always felt the vibrant characters and zany sensibility of The Fairly OddParents would make a great movie,” said Hartman. “I wanted to take the series in an unexpected direction by introducing live-action characters while keeping the integrity of the series’ trademark magic through CG animation.”