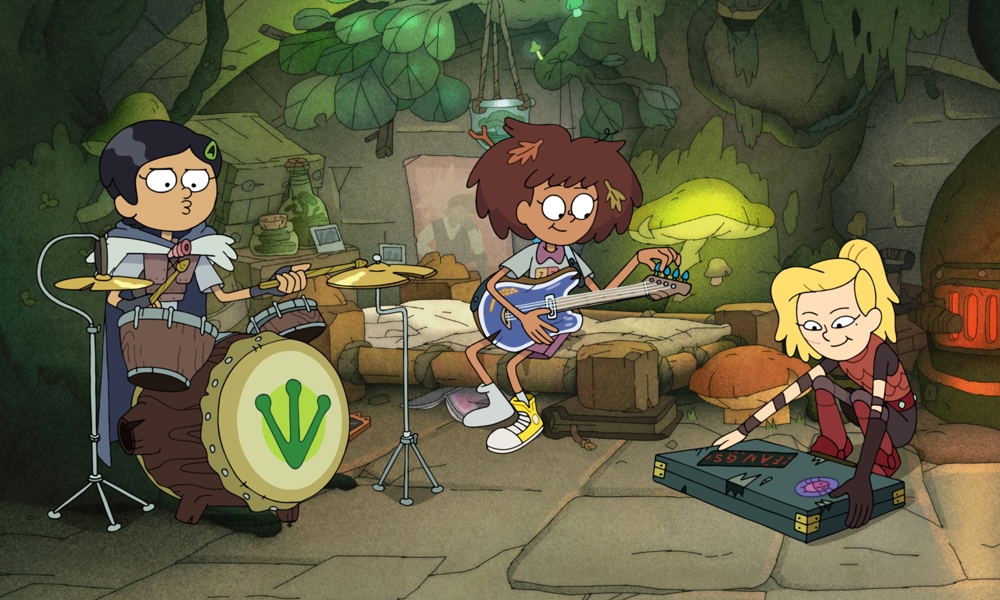 In the new episode of Disney Channel’s hit animated comedy this weekend, Anne (voiced by Brenda Song), Marcy (Haley Tju) and Sasha (Anna Akana) get down and rock out for a Battle of the Bands — Amphibia style! Two-parter “The Dinner/Battle of the Bands” premieres Saturday, April 24 at 9:30 a.m. EDT.

“After being split up for months, Anne, Sasha and Marcy are finally back together again! We wanted an episode that would allow them to have some fun as a group while also emphasizing how much their adventures have changed them as individuals,” said series creator Matt Braly. “To make things even more interesting, they are entering a ‘battle of the bands’ competition together. Performing onstage requires a lot of teamwork so this will be a big test for all three girls.”

In the exclusive clip below, the challenge of working together comes to the surface as Anne works up the courage to share a song she’s written with the band, only for Sasha to insist on “fixing” it.

Asked about having the three friends sing together for the first time in this episode, Braly noted, “It was very sweet and a good encapsulation of where the characters are emotionally at this point in the season. The episode ‘Battle of the Bands’ is ultimately a story about support, and I think you can feel that emanating from the final performance. Both songs featured in the episode (‘Heartstomper’ and ‘No Big Deal’) are total earworms and I hope people enjoy listening to them on repeat like I do.”

In fact, fans can angle for these earworms ahead of the episode premiere as the digital EP Battle of the Bands (Amphibia) debuts today (Friday, April 23) on Walt Disney Records!

Amphibia is a frog-out-of-water animated comedy series that chronicles the adventures of 13-year-old Anne Boonchuy, who is magically transported to the fantastical world of Amphibia, a rural marshland full of frog-people. There she meets an excitable young frog named Sprig Plantar (Justin Felbinger), his unpredictable sister Polly (Amanda Leighton) and overprotective grandpa Hop Pop (Bill Farmer).

In season 2, Anne and the Plantars are on a quest to unlock the mysteries of the music box as they leave the cozy confines of Wartwood for the distant city of Newtopia. On their journey, they will visit exotic new locations, uncover hidden secrets and experience unexpected reunions as they continue to search for a way to get Anne home. Read more about Braly’s approach to the second season in Animag‘s interview here.

The series was renewed for a third season last June, ahead of the S2 premiere.

Created and executive-produced by Annie Award-winner Matt Braly (Gravity Falls, Big City Greens), Amphibia is inspired by his heritage, family and childhood trips to Bangkok, Thailand. The series is a production of Disney Television Animation.