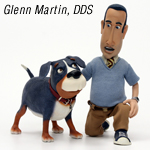 Glenn Martin, DDS has had success driving with his family across the United States in an RV, and now will be heading overseas.

The Tornante Co., which produces the animated Nick at Night comedy series, has announced Engine Entertainment will represent the series worldwide.

Currently airing its second season on Nick at Night, the series is the first from Tornante, which is owned by former Paramount and Disney executive Michael Eisner.

“The popularity of Glenn Martin, DDS continues to grow as new audiences abroad have embraced the show,” said Eisner. “Engine Entertainment’s deep relationships with international broadcasters will help bring the Martins to millions of additional households around the world.”

The project was brought to Engine by Phil Schuman of Highview Media, and brokered by Doug Miller at Tornante.