Nicktoons will debut Wild Grinders, the new animated series from skateboarding icon Rob Dyrdek (MTV’s Rob & Big, Fantasy Factory) on Friday, April 27 at 7 p.m. Inspired by Dyrdek’s real-life experiences, each original half-hour episode follows the adventures of a group of friends bonded by their love of skateboarding. The 26-episode series, created and executive produced by Dyrdek, is produced in partnership with Home Plate Entertainment and Dyrdek’s Four Down Productions. Agogo Corporation, Moonscoop, Telegael and Copernicus Studios are also co-producers on the HD show. Wild Grinders will air regularly on Fridays at 7:00 p.m. on Nicktoons.

“Wild Grinders becoming an animated series and airing on Nicktoons is another one of my boyhood dreams come true,” says Dyrek. “I came up with the name when I was eleven years old, when I needed a name for my first skate crew – who knew it would turn into such a mega brand. The journey we took to get to this point has been nothing but WILD. This series has everything, comedy, action and skateboarding. It is something I am very proud of and definitely will be a series kids will love for years.”

Wild Grinders follows the adventures of Lil Rob, a quick-thinking skater kid. The series also features Lil Rob’s talking right-hand dog Meaty (inspired by his own bull-dog of the same name), his best friend Goggles, and their middle school skate crew. The series follows the friends, known as Wild Grinders, on their escapades around their hometown of Sprawl City and at their beloved skate spot, The Lot. This smart, witty and talented posse from diverse backgrounds skate in and out of dilemmas, undertake new challenges and experience adventures together. 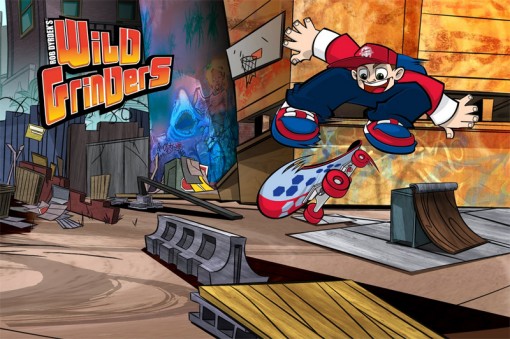 The Wild Grinders series will be distributed internationally by Moonscoop, who also serves as the consumer products provider/supplier.