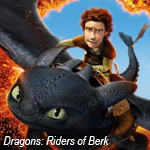 DreamWorks’ Dragons: Riders of Berk, a new animated series based on the Oscar-nominated feature film How to Train Your Dragon, premieres Sept. 4 at 7:30 p.m. ET/PT on Cartoon Network.

Dragons is the third episodic television series from DreamWorks Animation, and its first on Cartoon Network.

This weekly animated series follows the continuing adventures of Hiccup and his dragon Toothless on the Viking island of Berk, along with the band of dragon trainers, all of whom now have dragons of their own. Through their training, the young riders develop special bonds with their dragons by learning about each dragon’s unique powers, discovering entirely new species and battling against new villains as they explore whole new worlds they never dreamed existed.

Here’s a clip from the first episode:

DreamWorks Animation’s sequel to How To Train Your Dragon is scheduled to be released in theaters on June 20, 2014.