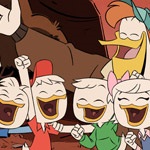 One of the most overlooked treasures in the long history of Disney is the Donald Duck comic-book series from Carl Barks. Revered for decades by comics fans who knew Barks — long unable to sign his own name to Disney work — only as “the good duck artist,” his decades-long run is a veritable gold mine of adventure.

Barks’ work inspired the original DuckTales cartoon, a major hit produced by the then-nascent Disney Television Animation from 1987-1990. That series, from its infinitely catchy theme song to successful spinoffs, brought Barks-style adventure to a generation that still reveres and loves the series. That, of course, made it primo material for a reboot.

As in the original, the new DuckTales follows Scrooge McDuck, the world’s richest duck and its greatest adventurer, and the escapades he and his great-nephews (triplets Huey, Louie and Dewey) get into — usually, defending Uncle Scrooge’s riches from rivals, pursuing lost treasures, solving mysteries and re-writing history from time to time. Joining them are the usual suspects: overprotective Donald Duck, the triplets’ uncle; Uncle Scrooge’s housekeeper Mrs. Beakley and her granddaughter Webby; and blowhard pilot Launchpad McQuack.

Viewers got their first taste of the series Aug. 12, with an hour-long premiere event on Disney XD, with the regular series celebrating Sept. 23 the 30th anniversary of the original’s debut with two new episodes airing six times that day.

Executive producer Matt Youngberg (Ben 10: Omniverse, Transformers: Animated) and co-producer/story editor Francisco Angones (Wander Over Yonder) confess — as does most of the crew — to being among the many die-hard fans of the original show. They love the original, and the Barks source material, and feel no small amount of pressure to make a show that lives up to expectations.

“We were all massive DuckTales and Barks fans — I mean the lyrics to the theme song were in my wedding vows,” says Angones. “We just have to incorporate it all and take the elements that work together and fit them into a thing that’s still new, that gives kids today the same feeling that we had when we heard the word DuckTales.”

The two key elements to that are the conceit that Uncle Scrooge was once the world’s greatest adventurer, and that the cast of ducks form a modern blended family. “You can track everything off of those two things,” says Youngberg.

The adventure part of it draws heavily on Barks’ tales. “We started with Barks, who was the first person to remix these characters,” notes Angones. “They existed as corporate mascots and funny cartoon characters, and Barks did Donald Duck finds pirate treasure.”

Anchoring this is the family dynamic, says Youngberg, himself the product of a large brood. “Every family that I know has in-jokes and secrets and alliances and rivalries,” he says.

With so large a cast, Angones says they put together a “murder board” and used it to figure out how each character was different and how each would interact and conflict with any combination of others. (In a nod to this, Webby unveils her own “murder board” of Scrooge McDuck’s family tree and history in the movie debut.)

The bonus is that these themes work together on multiple levels for fans. Barks’ comics ran from the 1940s through the 1970s, and the original animated series has been largely dormant since production ended in 1990, giving subtext to Uncle Scrooge’s return to adventuring and his reunion with Donald, the boys, Launchpad and Webby.

“You’ll see in the first season a lot of the stories pertain to who is your family, what is your lineage,” says Youngberg. “You’re discovering things about yourself and your family that you’ve never known before.”

Those meta-textual elements extend to the look of the show, for which technology offers options far beyond what either Barks or the original animated series could have imagined. Art director Sean Jimenez (Gravity Falls) says he wanted his designs to evoke the feel of reading Barks’ now-vintage comic books but also be functional for the crew working on a tight schedule to animate the first season’s 26 episodes of 22 minutes.

A high-resolution photo of a pulpy chunk of newsprint became the key to Jimenez’s look, which uses the texture along with offset printing and flat colors and subtle use of halftone dots on backgrounds inked like a comic book to create the show’s look.

“It was a great aesthetic to do that and to me there’s something beautiful about that whole offset idea,” says Jimenez. “Usually the knee-jerk reaction on any cartoon is to be very precise because you want the audience to see how good you are. But that’s not our style!”

Youngberg adds that the pulpy look and imperfections make the setting more realistic because they are not precise but they are specific. “It’s hard to come up with specificity and it’s hard to avoid cliche,” he says. “You hope the audience picks up on that and it makes it feel like a real place.”

Voices in the Mix

Casting the triplets and making sure each has a distinctive voice — and that Webby was included on par with the boys — was the most important part of the process. “The show lives and dies on whether you believe this family is a family, and whether their interchange is believable and relatable in some fun way,” says Angones.

“We didn’t want to treat the nephews as the same character, which is something that is usually done with them,” adds Youngberg. “We wanted to make sure we could find a way to distinguish their personalities clearly.”

Going through literally hundreds of combinations for the young characters, Youngberg says they kept coming back to the actors who made the final cut, all of whom have improv experience that gives them a realistic banter.

“Once we found the actors who embodied the characters, we actually went back and rewrote the first few scripts to get it even more in their voice,” says Angones.

Toon City Animation and Snipple Animation Studios, both in Manila, the Philippines, are animating the show. Youngberg says many Disney-trained artists work at those shops and “bring a classic sensibility to the show.” All the front-end work — writing, storyboarding, recording — is done at Disney Television Animation in Glendale, Calif., as is final editing, sound and music.

While fans have to wait until Sept. 23 for the series itself to kick off, the movie event has earned strong reviews from fans thrilled with the new mix of an old favorite. And that leaves the crew of the new show lots of opportunity to do what Barks’ comics and the original series did best.

“It wouldn’t be DuckTales if we didn’t solve mysteries and rewrite history,” says Youngberg.

You can watch the new TV movie in full via Disney XD’s platforms and on its YouTube channel here.