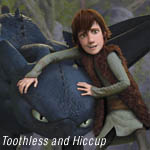 The next step in DreamWorks Animation’s plans to turn its hit feature How to Train Your Dragon into a full-fledged franchise arrived Tuesday with the announcement of a TV series based on the feature set to air on Cartoon Network starting in 2012.

The series deal comes on the heels of an announced sequel and the feature’s DVD and Blu-ray release later this week.

The series will follow feature film characters Hiccup and his dragon Toothless as they explore the world created by the feature film in original weekly adventures.

DreamWorks has had success turning its feature films into TV series, with The Penguins of Madagascar airing on Nickelodeon and a forthcoming Nick series based on Kung Fu Panda.