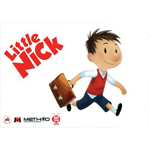 India-based DQ Entertainment has entered into a co-production agreement with M6 Studios in France for a second season the animated series Le Petit Nicholas (Little Nick).

The second season of the show will consist of 52 13-minute episodes and will be produced in CG with a budget of $10.3 million (7.7 million euros). Production is set to begin in 2011. Season one of the series — also co-produce by DQ and M6 — has aired in France and Germany, and is expected to debut shortly in India.

Under the deal DQE has the right to sell and distribute the series for broadcast and home video in Asian territories as well as all English-speaking nations.

The series is based on the comics character first published in 1959 and created by legendary French writer Rene Goscinny, co-creator of Asterix, and illustrated by Jean-Jacques Sempe.

“M6 Studios is very proud of the relationship which has been successfully developed on the production of Little Nick with DQE, and also the other companies involved in the production, Method Animation and Luxanimation,” says Thomas Valentin, president of M6.