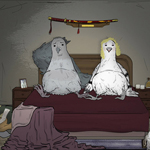 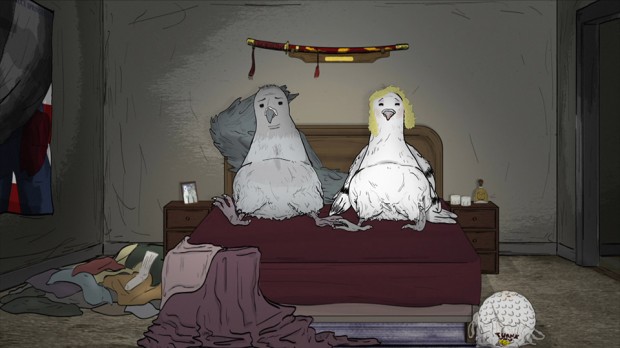 The creators of Animals, an animated comedy for adults, took the indie route to HBO.

Talking animals have been around as long as animation has, but the lives of non-human creatures trying to get by in the urban jungle that is modern day New York City serves up a fresh take on the idea in HBO’s new series Animals.

“It’s really a ‘Mike and I right now’ thing,” says Matarese. “If you don’t like it, they you really don’t like Mike or myself.”

The duo met three years ago while working at an ad agency and one day between projects were looking out a window at some pigeons and improvised a conversation between them.

“And we said that’s funny, let’s record us doing that and we did,” says Matarese, who at the time was experimenting with a new Wacom tablet and figured out his own way to animate his sketches using Illustrator and Final Cut.

“He sent me a text of the first pigeon that he had drawn for it, with the city background and it just suddenly was clear that our little riffing thing is going to have an entire esthetic that to me was just like so exciting,” says Luciano.

After completing one sketch, they submitted it to Channel 101 in New York and were having fun, so they kept at it. “Each episode got a little bit better and a little more involved looking,” says Matarese. “And then we just kind of found ourselves in animation.”

They next produced a 12-minute version and submitted it to the New York Television Festival, where it was well received and helped the duo make connections and secure agents and managers through which the project came to the attention of filmmakers Mark and Jay Duplass.

“They wanted to come on as executive producers to make it independently and that was right up our alley because we had been doing it just the two of us this whole time,” says Matarese. The connection helped them raise funding, and they moved out to an apartment in the Los Feliz neighborhood of Los Angeles, where they set up production with a small handful of animators and worked seven days a week on the first season.

With ten episodes complete, two episodes were screened last year as a special event at the Sundance Film Festival, leading to HBO picking up the show for two seasons. That’s when the production began looking for a more established studio and ended up at Starburns Industries, makers of Rick and Morty and Anomalisa.

“Every step of the way, it’s just been an interesting process of taking people who are pretty all talented but who have maybe a set way that they’re used to doing animation or drawing and say let’s scale this back,” says Luciano. “We don’t want that much movement or animation, and the characters need to have this kind of quality to it, and that’s been a learning process.”

Watching the show evolve over its first season has been a challenge but also a lot of fun.

“It really grows in an interesting way,” says Matarese. “Not necessarily in quality but in how we tackle different worlds and stuff like that. I think it’s going to be an interesting thing for people to see over a ten-episode stretch.”