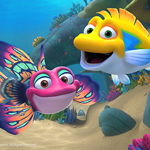 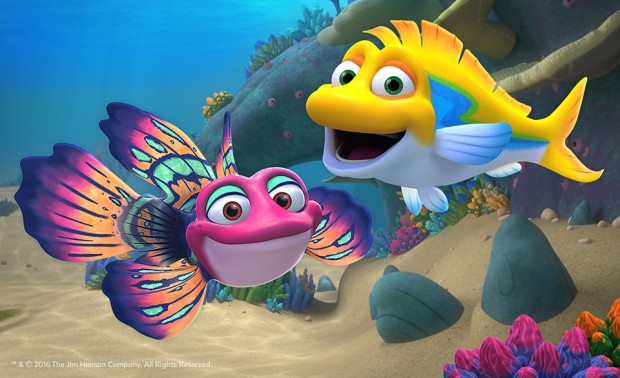 Making its world premiere screening at MIP Junior 2016, the preschooler show Splash and Bubbles has an origin that makes it unlikely to have been made by any company except The Jim Henson Company.

“At the Henson Company, when a puppeteer brings a project to you, it’s very Henson-y,” says Halle Stanford, executive VP of children’s entertainment.

The puppeteer in question is John Tartaglia, who as a teenager started performing Muppets for Sesame Street and since has gone on to create shows such as Johnny and the Sprites. Among Tartaglia’s projects was ImaginOcean, an educational puppet show about ocean habitats that had been performed for kids on cruise ships, and he asked Henson if they thought it could be a TV show.

“We said, absolutely,” says Stanford. “There was a lot of excitement about the show in terms of where it came from but also where we could push it in terms of the animation.”

The show features the two titular fish: Splash is a yellow fusilier fish who has migrated all over the ocean before settling down in Reeftown, and Bubbles is a Mandarin dragonet with a colorful personality. In each of the 80 x 11 min. episodes, the pair and their friends Ripples and Puff explore the world’s undersea habitats and celebrate its diversity and importance to the planet’s ecosystem.

“I feel like we really deliver on the awe of the ocean,” Stanford says.

The show uses the Emmy-winning Henson Digital Puppetry Studio, a proprietary technology used on shows such as Sid the Science Kid and allows puppeteers to perform digitally animated characters in real-time, enabling the animation to be more lifelike and spontaneous.

“A puppet for kids feels much more intimate,” says Stanford. “There’s a feeling for kids that these are friends that are real and we seem to have the same effect with our HDPS characters.”

Tartaglia performs Splash in the series, with Leslie Carrara-Rudolph of Abby Cadabby fame as Bubbles.

Henson is collaborating on the show with Hirschend Enterprises, a family-owned attractions corporation that manages events and experiences such as the Harlem Globetrotters, Dollywood and a number of major aquariums, water parks and hotels. The company was looking to get into entertainment media and its aquaria and similar philosophies to Henson made working with them on Splash a perfect collaboration, Stanford says.

Herschend is fully involved in the creative end and leveraging its assets to help promote Splash at its parks and aquariums, she says.

Slated to air in the United States on PBS Kids! starting Nov. 23, the MIP Junior screening will be the first chance for international broadcasters to see the finished product.

Stanford says Henson is confident the show — which many broadcasters have been tracking the progress of since it was first announced — will find an international audience.

“It’s been a unique process to work with the digital puppetry team and also doing key frame animation and melding the two,” says Stanford.