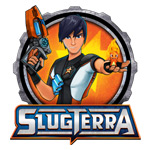 Disney XD has announced the premiered date for its new sci-fi comedy adventure series Slugterra. Co-produced by Canada’s Nerd Corps, the show will begin its run on Monday, October 15 at 3:30 p.m. New episodes will air Monday thru Friday on the boycentric cabler.

Slugterra follows the heroic journey of teen Eli Shane and his best friends, the Shane Gang, as they fight for justice in the mysterious, high-tech underground world of Slugterra. Eli is determined to follow in his father Will Shane’s footsteps, and become Slugterra’s greatest slugslinger. In order to master the art of slugslinging, Eli must collect, train and learn the art of dueling with magically powered critters called slugs, who transform into battling creatures. Eli and his team “slug it out” to try and protect the citizens of Slugterra from the evil Dr. Blakk, before he takes over this mystical underground world.

The action-packed toon was created and is executive produced by Asaph Fipke and features the voice talent of Sam Vincent (Voltron Force) as Eli; Lee Tockar (George of the Jungle) as Pronto; Shannon Chan-Kent (My Little Pony) as Trixie; Andrew Francis (Voltron Force) as Kord; and Mark Oliver (Shadow Raiders) as Dr. Blakk. The fantastical series is a production of Nerd Corps Entertainment and carries a TV-Y7 parental guideline.

On October 1st, DisneyXD.com will  also launch a new game called “Battle for Slugterra,” where players guide Eli Shane through the caverns and tunnels of the underworld as he battles enemies and collects new slugs for his Slug Arsenal. On that same day, DisneyXD.com will roll out original short form Slugisodes. On Monday, October 15 the series will premiere on WATCH Disney XD simulcast and on Tuesday, October 16, the series will be available on iTunes.

Check out next month’s issue of Animation Magazine for an interview with Slugterra creator Asaph Fipke.