Motorcity, an animated adventure series created by Chris Prynoski, is slated to premiere April 30 at 9 p.m. ET/PT on Disney XD.

The half-hour series follows a group of hot-rodding rebels, led by teenager Mike Chilton, out to overthrow an evil billionaire who has taken control of Detroit and banned cars.

Prynoski, an animation veteran whose credits include the Adult Swim series Metalocalypse, also directs and is executive producer on the series. The series features the voice talent of Reid Scott, Nate Torrence, Katie Micucci, Kel Mitchell, Jess Harnell, Brian Doyle Murray, Jim Breuer and Mark Hamill with Dee Snider as a reoccurring guest star. Motorcity is a production of Robin Red Breast, a subsidiary of Titmouse; and Disney Television Animation. 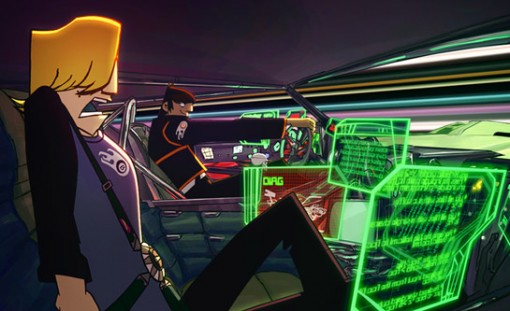 The premiere episode will be made available April 15 as a free download from Apple’s iTunes Store.

Disney XD is promotion the new series by having champion rally car driver Stephan Verdier racing a customized Motorcity vehicle in the 2012 Global Rallycross Championship. Verdier will participate in several Disney XD and Radio Disney fan experiences between May and September and will guest star in an upcoming episode of Motorcity.

Beginning in May on Disney XD, viewers are invited to join the action through a series of interstitials with Verdier and members of the Motorcity creative team. DisneyXD.com also will feature game performance tips from Verdier.

Additionally, Motorcity: Drive, a six-level, 3D racing, shooter game for iPhone, iPad and iPod touch recently launched. The game has reached the top 10 for free iPad games and the top 25 overall free iPad apps. It is available for free from the App Store at www.itunes.com/appstore and can be played online at DisneyXD.com/Motorcity.

Directly following the premiere on air, the series premiere episode will be available on DisneyXD.com.