Disney XD is growing its store of original series by ordering two new toons — Billy Dilley’s Super-Duper Subterranean Summer and Country Club — and re-upped the magical comedy hit Star vs. The Forces of Evil and short-form series Two More Eggs. The announcement was made Friday through The Hollywood Reporter.

Billy Dilley’s Super-Duper Subterranean Summer is created by Aaron Springer, a writer and director who has worked on SpongeBob SquarePants, Gravity Falls and the Mickey Mouse shorts. Premiering in 2017, the show follows eccentric, science-obsessed 7th grader Billy Dilley (voiced by Jessica McKenna) and his lab partners Zeke (Tom Kenny) and Marsha (Catie Wayne) as summer vacation takes an unexpected turn and they get trapped in a strange, magical world beneath the Earth’s surface. Springer serves as executive producer.

Country Club is created by comic book team Chris and Shane Houghton, who both were most recently on the Harvey Beaks story team at Nickelodeon. Coming in 2018, the show centers on Cricket Green — a mischievous and optimistic country boy whose family moves to the big city. Cricket’s curiosity and enthusiasm lead his family on epic fish-out-of-water adventures and endear them to their new urbanite neighbors. Rob Renzetti (Gravity Falls) serves as executive producer alongside the Houghtons.

Star vs. The Forces of Evil, created by Daron Nefcy and produced by Disney Television Animation, has been picked up for a third season. Two More Eggs, created by The Brothers Chaps (a.k.a. Mike and Matt Chapman) has received a second season order. 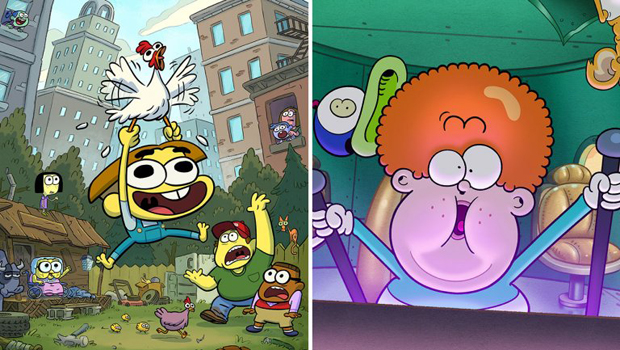