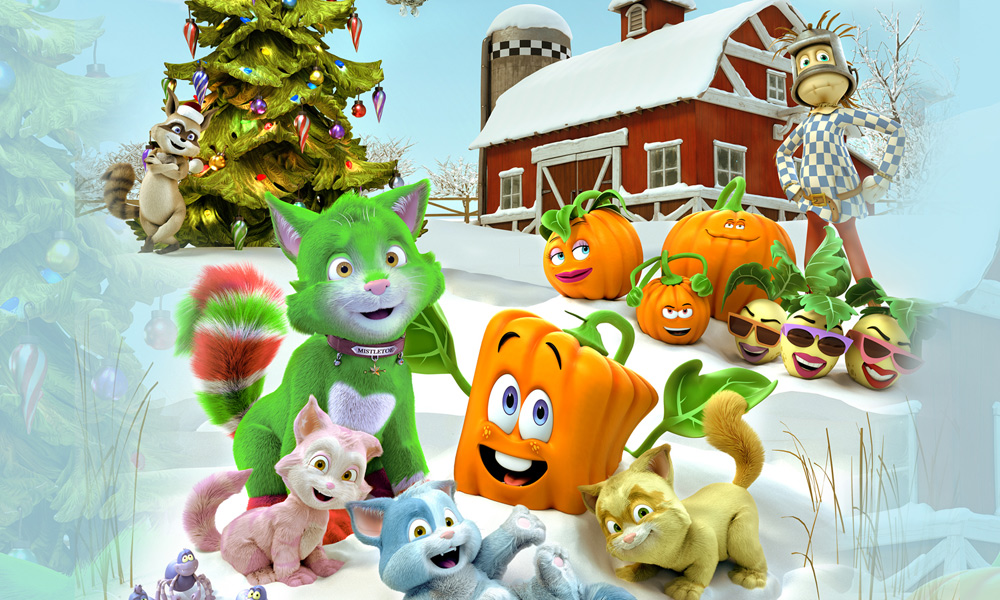 Spookley and the Christmas Kittens

Get in the holiday spirit with all of the cozy toon moments all the animated action young fans can want on Disney television channels next month. Highlights of the December programming slate include new seasonal episodes of T.O.T.S., Puppy Dog Pals, PJ Masks, Elena of Avalor, Big Hero 6, Gigantosaurus and Big City Greens, as well as the animated Holiday Hill Farm special Spookley and the Christmas Kittens.

9:30-10:00 A.M. EST (Disney Channel) T.O.T.S. “Santa Baby/Shear Madness” Pip and Freddy teach a magical baby reindeer the joy of Christmas giving. | When Pip and Freddy accidentally shave a baby sheep’s wool, they struggle to fix it before delivering it to its parents.

10:00-10:30 A.M. EST (Disney Channel) Puppy Dog Pals “Elves for a Day/The Dreidel Dilemma” When Bingo and Rolly learn that Santa’s elves are struggling to make the Christmas deadline, they go to the North Pole to lend a paw. Stephen Tobolowsky (ABC’s The Goldbergs) guest stars as a worried elf. | Keia enlists Bingo and Rolly’s help to bring Chloe’s special dreidel to her grandparents’ home.

12:30-1:00 P.M. EST (Disney Channel) Elena of Avalor “Festival of Lights” A royal family from the Latino Jewish kingdom of Galonia is shipwrecked off the coast of Avalor on their way home to celebrate Hanukkah, so Elena invites them to the palace to celebrate their cherished holiday and learn about their traditions. Jamie-Lynn Sigler (The Sopranos) and Tovah Feldshuh (Star Wars Resistance) guest star as Princess Rebeca and Grandma Miriam, respectively.

7:00-8:00 P.M. EST (Disney Junior) Spookley and the Christmas Kittens In this original animated special, Spookley and Mistletoe brave a raging winter storm to find a home for three stray kittens.

8:30-9:00 A.M. EST (Disney Junior) Gigantosaurus “The Shortest Day/Mazu’s Comet” On the shortest day of the year, Tiny throws a huge party to lift everyone’s spirits, but all the decorations, food and presents fall into a crevasse. | Mazu wants to see a once-in-a-lifetime comet.

9:30-10:00 A.M. EST (Disney Channel) Big City Greens “Green Christmas” On Christmas Eve, Tilly warns Cricket that he may not be on Santa’s Nice List, so Cricket sets out to do as many good deeds as possible before the end of the day. Meanwhile, Gramma and Nancy try to come up with a last-minute gift for Bill. Christopher Lloyd (Back to the Future) guest stars as Santa Claus and Wendi McLendon-Covey (The Goldbergs) returns as Nancy Green.

10:30-11:00 A.M. EST (Disney Channel) Muppet Babies “Run Fozzie Run/My Brother Vinny” After Fozzie accidentally breaks the swing and runs away to the jungle to avoid getting in trouble, the rest of the Muppet Babies set out to find him. | Rizzo feels insecure when his superstar singing big brother, Vinny, visits the playroom. John DeLuca (Disney Channel’s Teen Beach Movie) guest stars as Vinny.

11:00-11:30 A.M. EST (Disney Channel) The Rocketeer “Downhill Derby/Flight Class Heroes” Kit and Tesh are excited to compete in Hughesville’s Downhill Go-Cart Derby until a scheming young inventor enters and threatens to ruin the race with a homemade weather machine. Luca Padovan (You) guest stars as Rolland. | When Kit’s flight class finds themselves airborne in a pilotless plane, they must learn to work together to land it safely. D’Arcy Carden (The Good Place), Navia Robinson (Disney Channel’s Raven’s Home) and Ian Chen (ABC’s Fresh off the Boat“) guest star as Ava, Valerie and Logan, respectively.