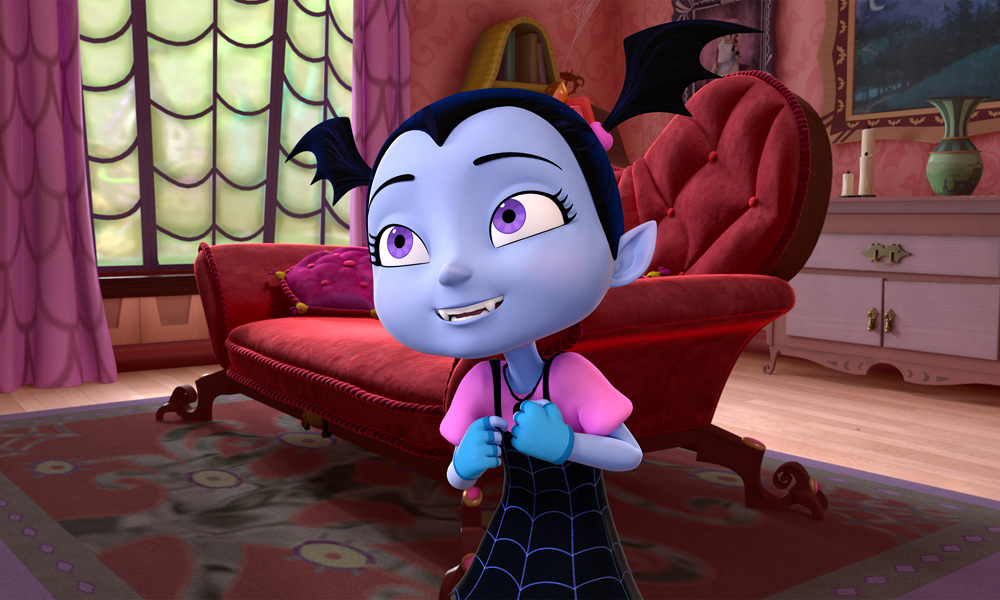 The countdown to Halloween begins with plenty of Disney TV animation debuts throughout October. Highlights of the month include an original stop-motion seasonal short inspired by the world of Descendants, plenty of kid-friendly creepiness on Vampirina, and season premieres of Fancy Nancy, Star Wars Resistance, Elena of Avalor and Rapunzel’s Tangled Adventures!

Friday, Oct. 4
11:00-11:30 A.M. EDT (Disney Channel) Vampirina “Trick or Treaters/Play It Again, Vee” Vampirina is excited to go trick or treating with her friends for the first Time. | After Vampirina’s diorama project is destroyed, Demi casts a time loop spell to prevent it from happening again.

11:30 A.M. -12:00 P.M. EDT(Disney Channel) Fancy Nancy “The Return of Dudley/Nancy Quits the Clancy’s” Season Two Premiere Nancy accidentally becomes Freddy’s new best friend when JoJo ditches him for her imaginary friend. | Yearning freedom, Nancy decides to live on her own in the Playhouse.

1:00-2:00 P.M. EDT (Disney Channel) Rapunzel’s Tangled Adventure “Rapunzel’s Return” Season Three Premiere After learning the reason behind Cassandra’s betrayal, Rapunzel returns to Corona only to find it taken over by one of her most dangerous enemies.

Tuesday, Oct. 8
12:30-1:00 P.M. EDT (Disney Channel) Elena of Avalor “To Save a Sunbird” After Elena discovers that Hool used up her life force to repair her scepter, she risks everything to save her friend. Whoopi Goldberg (The View), Cloris Leachman (The Last Picture Show) and Tony Plana (Ugly Betty) return as sunbirds, Lama, Hool and Qapa, respectively. Kate Micucci (DuckTales) guest stars as Young Hool.

Wednesday, Oct. 9
12:30-1:00 P.M. EDT (Disney Channel) Elena of Avalor “Father-in-Chief” On the day the new Chief of the Jaquins will be chosen, Migs must bring his three Jaquin kids to work. Gia Lopez (Jane the Virgin) and Rosie Perez (Rise) return as Estrella and Dulce, respectively.

Sunday, Oct. 13
6:00-6:30 P.M. EDT (Disney XD)/10:00-10:30 P.M. EDT (Disney Channel) Star Wars Resistance “A Quick Salvage Run” The Colossus is in dire need of hyperfuel, and Kaz suggests they take it from a downed First Order ship. The salvage mission is compromised when the First Order shows up. Elijah Wood (The Lord of the Rings trilogy) and Donald Faison (Scrubs) return as Jace Rucklin and Hype Fazon, respectively.

7:30-8:20 P.M. EDT (Disney Junior) Elena of Avalor “The Magic Within” On the eve of Carnaval, Elena attempts to capture Avalor’s most dangerous villain and falls into an ancient well of magic crystals, giving her new magical abilities. Kether Donohue (You’re the Worst) guest stars as Flo, a fantasy creature who Elena brings to life using her new magic.

Tuesday, Oct. 15
9:00-9:30 A.M. EDT (Disney Channel) Mickey Mouse Mixed-Up Adventures “One Unicorny Day!/The Happy Horse Helpers!” When a horse gets a traffic cone stuck on her head and is sprayed with sparkly paint, the townsfolk think they’ve seen a real unicorn. | Minnie and Daisy are thrilled when a ranch owner asks them to give horseback riding lessons.

Wednesday, Oct. 16
9:00-9:30 A.M. EDT (Disney Channel) Mickey Mouse Mixed-Up Adventures “Animal Antics/Here, Kitty, Kitty, Kitty!” A Safari Park race provides a perfect opportunity for the gang to run their roadsters through the Mixed-Up Motor Lab, converting them into their favorite animals. | When Commander Heist’s kitty runs away because he is being mean, he asks the Happy Helpers to teach him how to be nice.

12:30-1:00 P.M. EDT (Disney Channel) Elena of Avalor “Flower of Light” When two mischievous spirits try to ruin Día de los Muertos, Elena teams up with her childhood friend Felicia to travel to the spirit world and save the holiday. Eugenio Derbez (Overboard), Taye Diggs (Set It Up) and Olga Merediz (In the Heights) guest star as Guillermo, Sombra and Felicia, respectively. Nestor Carbonell (Lost) and Andrea Navedo (Jane the Virgin) return as Elena’s parents, King Raul and Queen Lucia.

9:30-10:00 A.M. EDT (Disney Channel) T.O.T.S. “Monkeying Around and Around/Koala Kuisine” Pip and Freddy deliver a monkey who loves to play pretend so much, it gets in the way of his delivery. K.C. makes something tasty for a baby hippo who refuses to eat his food.

11:00-11:30 A.M. EDT (Disney Channel) Vampirina “Vamp-Opera/This Haunted House is Closed” Vampirina uses magic to write a new song for her block party that accidentally puts the whole town under a singing spell. All of the Scare B&B’s favorite guests return to help restore it to its spooky state before the haunted house inspector arrives.

9:30-10:00 P.M. EDT (Disney XD) Marvel’s Spider-Man “Brand New Day” When a series of attacks by a suspected team of super-villains captures The Avengers, Spider-Man is left to figure out who could be behind it.

12:30-1:00 P.M. EDT (Disney Channel) Elena of Avalor “King Skylar” When Skylar’s father falls ill, he becomes king for a day and must learn what it takes to be in charge. Jenifer Lewis (ABC’s black-ish) returns as Tornado.

Friday, Oct. 25
9:00-9:30 A.M. EDT (Disney Channel) Mickey Mouse Mixed-Up Adventures “A Gollywood Wedding!/No Dilly Dally in New Delhi!” Mickey and his pals travel to New Delhi, India, for the wedding of their friends Savi and Raj. | The Happy Helpers assist an old friend who runs an auto-rickshaw business by being Tuk-Tuk Drivers for the day.

10:30-11:00 A.M. EDT (Disney Channel) Muppet Babies “Tagalong Polliwog/Sparkly Star Switcheroo” Kermit’s nephew, Robin, comes to visit and everyone is excited to play with him, but Kermit is very protective and asks him to sit out on a lot of the games because he feels he is too small to keep up with the others. | When Rizzo is sad about not making a wish on a shooting star, Summer paints a sparkly star to cheer him up. Fan-favorite Muppet, Rowlf, returns in the episode.

11:30 A.M. -12:00 P.M. EDT (Disney Channel) Fancy Nancy “Paris, Adieu!/Nancy’s Fancy Heirloom” When Grace returns from a summer vacation trip to Paris, Nancy is determined to save money to go to her beloved city too. | Nancy realizes she is more like her Mom than she thought.

9:30-10:00 P.M. EDT (Disney XD) Marvel’s Spider-Man “The Cellar” Spider-Man takes his mission to The Cellar where he believes The Regent is using the powers of Cloak and Dagger, as well as other supervillains, to hold The Avengers captive.