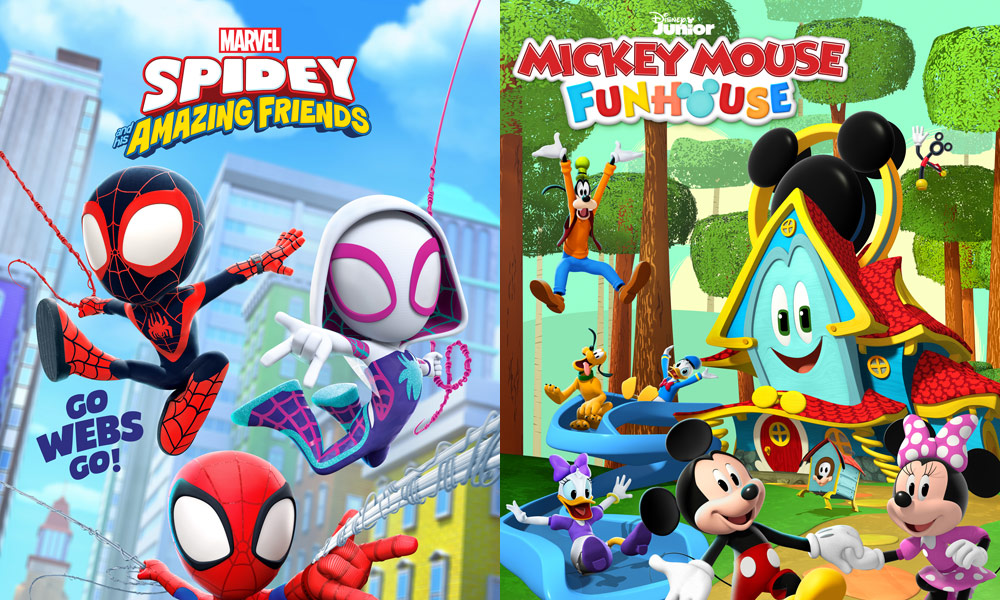 “Jump into Wow” this summer with the premieres of two new series on Disney Junior — Marvel’s Spidey and his Amazing Friends and Mickey Mouse Funhouse — both featuring beloved iconic characters starring in brand-new stories for kids and families to enjoy.

Premiering Friday, August 6 with a simulcast on Disney Channel and Disney Junior (9 a.m. EDT/PDT), Marvel’s Spidey and his Amazing Friends is the first full-length Marvel series for preschoolers. The series follows Peter Parker, Gwen Stacy and Miles Morales and their adventures as the young heroes team up with Hulk, Ms. Marvel and Black Panther to defeat foes like Rhino, Doc Ock and Green Goblin and learn that teamwork is the best way to save the day. The series voice cast includes Benjamin Valic (Sonic the Hedgehog) as Peter Parker, Lily Sanfelippo (The Chicken Squad) as Gwen Stacy and Jakari Fraser (Ben Is Back) as Miles Morales.

Premiering Friday, August 20 with a simulcast on Disney Channel and Disney Junior (8 a.m. EDT/PDT), Mickey Mouse Funhouse continues the Disney Junior legacy of highlighting Disney’s #1 star, Mickey Mouse, and his pals for the preschool audience. The series introduces a new character, Funny, an enchanted talking playhouse voiced by Harvey Guillén (What We Do in the Shadows), who takes them on adventures to unique lands that inspire the imagination, introducing a whole new generation to the captivating world of these beloved characters. The series guest cast includes Jenifer Lewis (black-ish) and Grammy Award nominee Mickey Guyton.

Each series will be available in DisneyNOW on their respective premiere dates and will begin streaming on Disney+ shortly thereafter. Launch platforms will vary in international territories.

Phil Weinstein is executive producer and supervising director, Thomas Hart is co-executive producer and supervising story editor, and Mark Drop is story editor — all from the Emmy-nominated Mickey and the Roadster Racers. Emmy Award winner Alan Bodner (Rapunzel’s Tangled Adventure) serves as art director, and Steve Walby (Mickey Mouse Mixed-Up Adventures) is producer. Beau Black (The Lion Guard) is the series composer and co-writes the original songs with Loren Hoskins (Jake and the Never Land Pirates). The series is a production of Disney Television Animation.