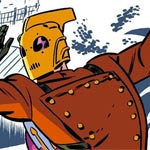 Disney Junior has started production on a new animated adaptation of The Rocketeer aimed at young kids and their families, starring a new version of the retro-futurist hero. The announcement was made Tuesday morning by Joe D’Ambrosia, SVP of Original Programming for Disney Junior.

Set to debut in 2019, the new series takes Dave Stevens’ popular comic-book adventures and recasts them with Kit, a young girl who receives an incredible birthday surprise: a package that reveals she is next in line to become the legendary jet pack-toting champion the Rocketeer. Armed with her cool new gear and secret identity, Kit is ready to take flight and save the day with her gadget-minded best friend, Tesh, and airplane mechanic uncle, Ambrose, who join her on her epic adventures.

“We are very excited to introduce The Rocketeer to our young Disney Junior audience. The vast storytelling found in the original comic books provides the perfect opportunity to create an exciting new adventure series told from a young girl superhero perspective that the whole family can enjoy together,” said D’Ambrosia.

The Rocketeer is aimed at kids ages 2-7 and their families, with each episode featuring two 11-minute stories and an original song. Nicole Dubuc (Transformers: Rescue Bots) is executive producer. The series will be produced by Wild Canary in association with Disney Junior.

The character first appeared in comics in 1982, as a stunt pilot who one day picks up a jetpack tossed by some fleeing criminals and discovers he can use it to soar through the skies of 1938 America. Walt Disney Pictures released a live-action film directed by Joe Johnston in 1991 and confirmed a “reboot sequel” was in the works in 2016; the property also inspired an NES sidescroller game from Bandai and a minigame anthology title from NovaLogic for PC/SNES in 1991.