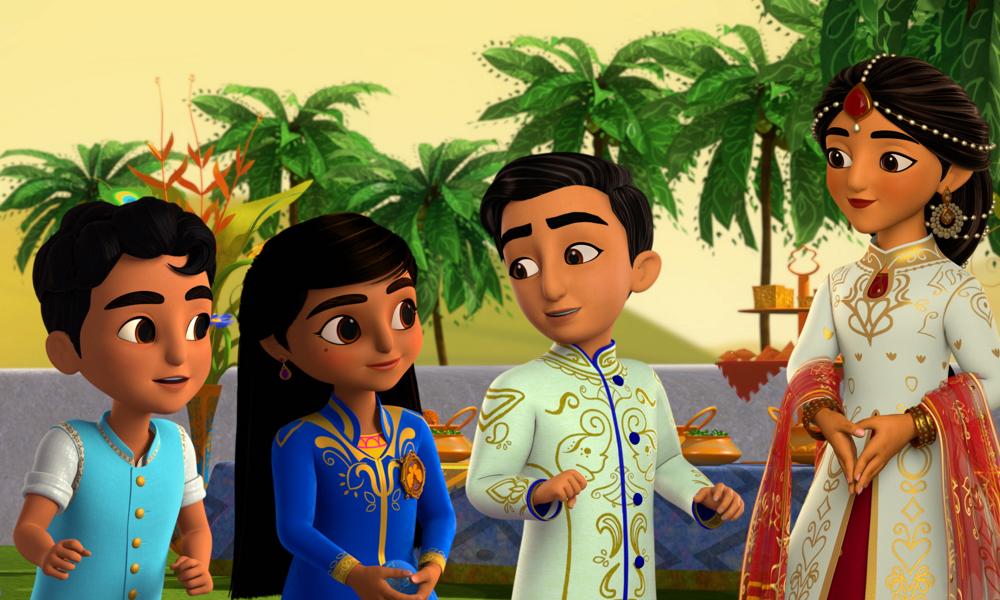 In celebration of Asian Pacific American Heritage Month, Disney Junior will debut three new episodes and a new short-form interstitial series of its hit animated series, Mira, Royal Detective, about a young girl who is appointed to the role of Royal Detective and travels throughout the magical Indian-inspired kingdom of Jalpur solving mysteries for her friends and family.

Highlighting key cultural themes like the importance of family, food and traditions, the episodes will premiere the next three Fridays (May 1, 8 and 15) at 11 a.m. EDT/PDT on Disney Channel, and will also be available on Disney Junior and DisneyNOW. Kunal Nayyar (The Big Bang Theory) and Rizwan Manji (Schitt’s Creek) guest star in the episode debuting Friday, May 15.

Also premiering in May is a new short-form interstitial series titled We’re on the Case, which follows Mira and her mongoose friends, Mikku and Chikku, as they embark on mystery-solving adventures for young viewers to follow along at home that highlight the vibrant culture and heritage of India. The first short debuts this Friday, May 1 (7:24 a.m. EDT/PDT on Disney Channel and 9:18 a.m. EDT/PDT on Disney Junior) and centers on the peacock, the national bird of India.

In addition, Disney Junior will spotlight series’ choreographer Nakul Dev Mahajan, who will take viewers behind the scenes of the series’ Bollywood music video, and Disney Channel will introduce viewers to Leela Ladnier, the voice of Mira, in on-air interstitials that will air throughout the month.

Since its premiere in March, Mira, Royal Detective has been praised by viewers and critics — especially among the Asian American community — for its depiction of South Asian culture and customs.

“Mira, Royal Detective is a groundbreaking new children’s series set in a fictional kingdom but incorporating authentic Indian customs and culture. It is the rare example of a series that actually stars a South Asian character who gets to tell her own stories, instead of just serving a supporting role.” – Daniel Mayeda, Chair of the Asian Pacific American Media Coalition (APAMC)

“We applaud Disney for the development of [Mira, Royal Detective] and how it introduces and projects the beauty and diversity of South Asian culture, music, attire and religion to its audience. The show allows children of South Asian heritage to see themselves in the show and how their culture also deserves to be celebrated and shared.” – Gujari Singh, Communications Director of the Sikh American Legal Defense and Education Fund (SALDEF)

“Mira, Royal Detective is a welcome addition to animated children’s programming that features a smart and dynamic heroine and captures the customs, colors and music of South Asia. There is a veritable collection of the voice talents of notable actors from the South Asian diaspora. The stories have characters with South Asian names who hold a variety of careers and jobs (from queen to kulfi vendor to dance instructor to inventor) and exhibit traits such as creativity, compassion and competitive-ness that make up a broad and detailed world for Mira and friends to have adventures.” – Shilpa Davé, author of Indian Accents: Brown Voice and Racial Performance in American TV and Film and professor of Media Studies at University of Virginia

New episodes premiering in May (11 a.m. EDT/PDT, Disney Channel) are:

Friday, May 1: “The Mysterious Polo Player/The Case of the Secret Treasure” – In the first story of the episode, Mira is determined to figure out the identity of a mysterious polo player. Then, Mira and her friends find a treasure map that leads to mysterious tunnels under the palace.

Friday, May 8: “The Case of the Chiseling Chiselers/A Patchwork Mystery” – When the royal sword goes missing, Mira agrees to help Veer find it. Then, when a tapestry that Priya created for Jalpur’s anniversary celebration is nowhere to be found, Mira sets out on the case to find it before the party begins.

Friday, May 15: “Mystery at the Marketplace/Mystery in the Sand Dunes” – Meena and Priya want to make special ladoos for their father Naveen’s homecoming party, so Mira must help them track down the spice merchant, Mr. Khan, who has an essential ingredient. Kunal Nayyar (The Big Bang Theory) and Rizwan Manji (Schitt’s Creek) guest star as Naveen and Mr. Khan, respectively. While testing Neel’s new vehicle in the desert, a sandstorm causes it to become lost.