Disney Junior has ordered two new animated series and put in second season orders for The Lion Guard and Goldie & Bear, it was announced by EVP of Original Programming and General Manager of Disney Junior Worldwide Nancy Kanter. The new shows are Vampirina — executive produced by Doc McStuffins creator Chris Nee — and Puppy Dog Tails, created by comedian Harland Williams. Both series are now in production and will premiere in 2017.

Vampirina, inspired by Disney Publishing’s kids book series Vampirina Ballerina, tells the story of a young vampire girl who faces the joys and trials of being the new kid in town when her family moves from Transylvania to Pennsylvania. Many of the key creatives behind Peabody Award-winning series Doc McStuffins are onboard, including executive producer Chris Nee and co-executive producer Norton Virgien. Nicky Phelan (Granny O’Grimm’s Sleeping Beauty) is directing the series, which is produced by Brown Bag Films in association with Disney Junior.

Puppy Dog Tails is created by comedian and actor Harland Williams and follows fun-loving pug puppies Bingo and Rolly, whose thrill-seeking appetites take them on daily adventures around their neighborhood and beyond. Williams also served as consulting producer, with executive producer Sean Coyle (The Awesomes, Mickey Mouse Clubhouse) and story editor Dean Batali (That ‘70s Show). The show is produced by Wild Canary in association with Disney Junior.

The Lion Guard (produced by Disney Television Animation) launched in January and ranked as the No. 1 series across preschooler networks in Total Viewers and preschoolers 2-5 for two consecutive months. Last month, it placed among the monthly Top 10 series with kids 2-5 across all cable TV networks. Goldie & Bear (produced by Titmouse in association with Disney Junior) ranked as 2015’s No. 1 series across preschool networks. 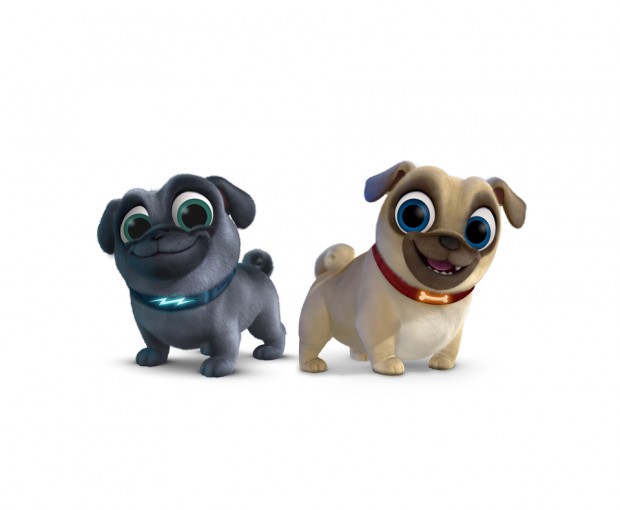