Disney Channel has taken the initiative to order a second season of animated spinoff show Tangled: The Series ahead of the season one premiere, with Chris Sonnenburg as executive producer and supervising director. The Disney Television Animation production inspired by the hit feature film will launch with the music-filled Disney Channel Original Movie Tangled Before Ever After on March 10 (8 p.m. ET/PT), followed by the series premiere March 24 (7:30 p.m. ET/PT).

More information on the TV movie and series here.

An initial line of role-play products, dolls and playsets inspired by Tangled: The Series will debut at New York Toy Fair this Saturday, and will be available at retail in fall of 2017, along with new apparel and accessories. Disney Publishing will debut print and e-book titles including an original middle grade series by Leila Howland. Walt Disney Records recently released the single “Wind in My Hair” performed by Mandy Moore and will debut “Life After Happily Ever After,” performed by Moore, Zachary Levi and Clancy Brown, on March 10. A DVD of the TV movie Tangled Before Ever After and four animated shorts will be released by Walt Disney Studios on April 11.

Tangled: The Series was developed for TV by Chris Sonnenburg and Shane Prigmore, with Sonnenburg serving as executive producer and supervising director. Benjamin Balistreri is supervising producer. Kevin Kliesch serves as score composer. 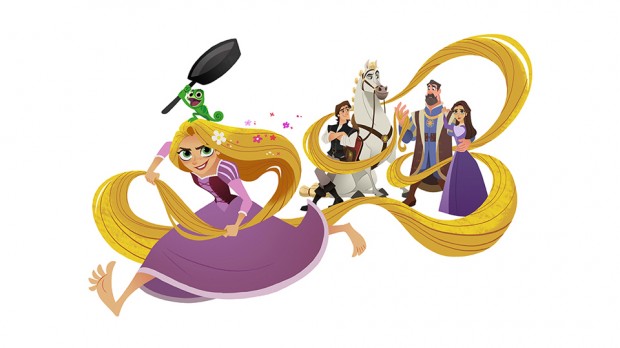