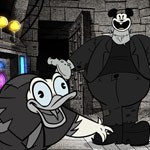 The WATCH apps for Disney Channel, Disney XD and Disney Junior have been rolled up into one new destination, dubbed DisneyNOW. The combo app provides access to full episodes of series from each network (with user authentication via their cable/satellite/digital provider), Disney Radio, and more than 60 games and activities all in one place, with an upgraded user experience.

New games will be added each month, and DisneyNOW will continue the previous apps’ drive to keep on top of new episodes of current series — plus original TV movies and more.

“The decision to consolidate our Disney Channel Watch apps into the new DisneyNOW app was driven by what kids told us they want in a video experience,” commented Kimberly Hicks, VP of Digital Media for Disney Channels. “The upgraded app enables us to showcase great stories and characters, and bring the magic of Disney Channel, Disney XD and Disney Junior to their daily lives.”

On the linear front, the family of TV channels has plenty of animated programming highlights coming up in October — including lots of fun Halloween themed toon treats and the debut of new series Vampirina (details below). Plus, new episodes of

Sun., Oct 1
Puppy Dog Pals “Return to the Pumpkin Patch / Haunted Howl-oween” (10:30 – 11:00 A.M. EDT; Disney Channel) After Bingo loses his collar at a pumpkin patch, he, Rolly and Hissy return to find it. Then when a neighborhood kid can’t trick-or-treat because she’s lost her costume, Bingo and Rolly go on a mission to track it down.

Vampirina “Going Batty / Scare B&B” SERIES PREMIERE (11:00 – 11:25 A.M. EDT; Disney Channel) Vampirina (a.k.a. “Vee”) is nervous about making new friends after she and her family move from Transylvania to Pennsylvania. Then, the Hauntley’s open up a Scare B&B and accidentally book two groups for the same night.

Vampirina “The Sleepover / Portrait of a Vampire” (11:25 –11:50 A.M. EDT; Disney Channel) Vee invites her new human friends over for a sleepover. Then, on Vee’s first day of school, she gets frightened during her class photo and leans on her new friend, Poppy, for support.

DuckTales “Terror of the Terra-firmians!” (8:00 – 8:30 A.M. EDT; Disney XD) Huey and Webby’s disagreement over the existence of a mythic species leads the kids to explore an eerie abandoned subway tunnel, while Mrs. Beakley grows suspicious of Lena.

Sun., Oct. 8
Marvel’s Avengers: Secret Wars “Why I Hate Halloween” (8:00 – 8:30 A.M. EDT; Disney XD) The Avengers must protect a Hydra scientist from the vengeful forces of Dracula and his vampires.

Tangled: The Series “The Wrath of Ruthless Ruth” (7:30 – 8:00 P.M. EDT; Disney Channel) When The Snuggly Duckling suddenly becomes haunted by its original owner, Ruthless Ruth (Danielle Brooks of Orange Is the New Black), Rapunzel helps the Pub Thugs figure out the reason behind the ghost’s return.

Mickey Mouse “The Scariest Story Ever: A Mickey Mouse Halloween Spooktacular” (8:00 – 8:30 P.M. EDT; Disney Channel) Mickey is challenged by his nephews to tell a scary story on Halloween night.

Mon., Oct. 23
Pickle and Peanut “Camp / Freeway Island” (7:30 – 8:00 A.M. EDT; Disney XD) The duo tries to get the summer camp experience they never had when they stumble upon a spooky abandoned campground. Then, Pickle and Peanut crash their van onto a freeway island and must learn how to survive on it.

Tues. Oct. 24
Pickle and Peanut “Wet Wedding / Tweenage Lupinus” (7:00 – 7:30 A.M. EDT) Pickle and Peanut take over as captains of the ship to save their friend’s wedding cruise. Then, when Peanut thinks he’s been transformed into a werewolf, he’s determined to find a way to turn Pickle into one, too. 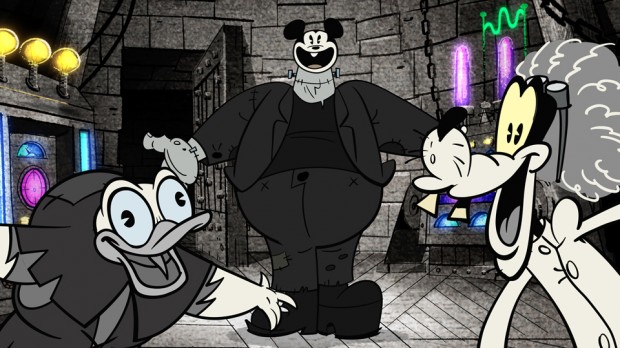 The Scariest Story Ever: A Mickey Mouse Halloween Spooktacular